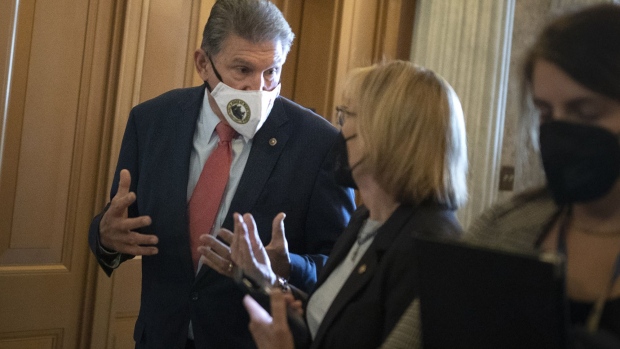 (Bloomberg) -- The White House is stepping up pressure on congressional Democrats to finalize at least the framework for a deal on President Joe Biden’s economic agenda on the eve of the president’s departure Thursday for a series of meetings in Europe.

Senior White House officials met on Capitol Hill Wednesday morning with key moderates Joe Manchin of West Virginia and Kyrsten Sinema of Arizona, following up on the senators’ session with Biden Tuesday night. Biden needs the support of all Democrats in the evenly divided Senate to squeak his social-spending and tax plans through that chamber.

Biden is also keeping the door open to a meeting with Democrats on Capitol Hill later Wednesday to discuss his agenda, a White House official said.

The president has hoped to have the contours of a deal worth as much as $2 trillion in new spending for social and climate programs, before a climate-change summit begins in Glasgow next week.

Speaker Nancy Pelosi told House Democratic leaders Wednesday morning that she will lay out within several hours the next steps regarding the tax-and-spending bill and a separate $550 billion infrastructure package that has already passed the Senate, a person familiar with the meeting said.

House progressives have held up a vote on the infrastructure bill as leverage on negotiations on the larger tax and spending package. Pelosi acknowledged at the meeting that the House needs to have confidence in the social-spending legislation before voting on the roads and bridges measure, the person familiar said.