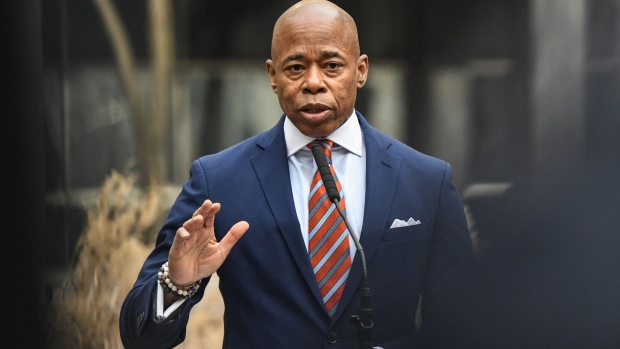 Eric Adams, mayor of New York, speaks during a news conference outside the Manhattan Civil Courthouse in New York, U.S., on Thursday, Jan. 13, 2022. Adams said he is considering a temporary remote option for the city's public schools, in a stark reversal of his position to keep kids learning in person despite a surge in Covid cases. , Bloomberg

(Bloomberg) -- President Joe Biden will promote his administration’s efforts to fight gun crime in New York next week with Mayor Eric Adams, who is confronting a spate of violence early in his administration including the shooting deaths of two police officers.

The administration is also stepping up federal efforts to stop gun trafficking.

Adams, a former police officer, campaigned on a pledge to tackle the city’s rising crime rate. Since he took office on Jan. 1, five officers have been shot, including two who died after responding to a domestic disturbance call in Harlem on January 21.

“We welcome the opportunity to display to President Biden how federal and local governments can coordinate and support each other in this fight to keep New Yorkers safe,” Adams said in a statement after the White House announced the trip.

When Adams, then the Democratic nominee for mayor, visited the White House last year for a meeting on combating crime, he boasted that he was “the Biden of Brooklyn.”

Biden in June released a plan on gun crime and public safety that would pour billions of dollars into programs to prevent gun violence and other violent crime. Those efforts in part draw on funding from the $1.9 trillion American Rescue Plan, including $5 billion for community violence intervention programs.

His 2022 budget request called for an additional $300 million for a program supporting community policing.

In New York, though, most categories of crime rose from 2020 to 2021, with the overall total for major crimes in the city exceeding 100,000 incidents for the first time since 2016.