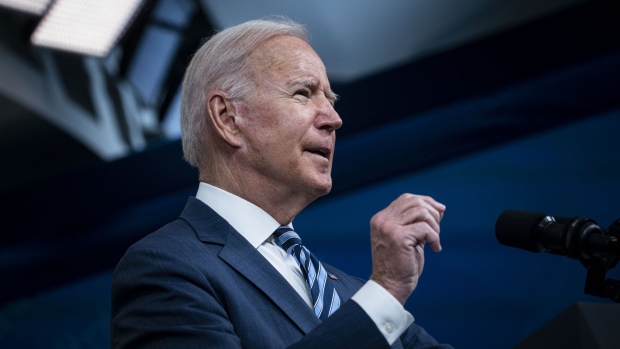 (Bloomberg) -- President Joe Biden needs Democrats in Congress to give him a political boost by passing his $4 trillion economic agenda, but deepening divisions in the party threaten the chances of that happening any time soon.

Lawmakers are attempting to craft one of the most complex tax and spending bills ever contemplated, with virtually no area of the budget or tax code left untouched, during just a handful of work days this month.

The tax-writing House Ways and Means Committee is set to start working on its portion of Biden’s $3.5 trillion plan this week as other committees plow through their components, including education, health care and climate.

Democratic leaders’ goal is to have the tax and spending package wrapped up by the end of the month, so that the House can give final passage to a separate $550 billion bipartisan infrastructure bill.

That schedule risks getting sidetracked, though, by a widening rift between Democratic progressives and moderates over the size of the tax and spending package -- known as reconciliation -- and a looming battle with Republicans over raising the federal debt limit.

“Right now there is no way I can see Congress meeting the September deadline,” said Jim Manley, who was top aide to former Senate Majority Leader Harry Reid. “This reconciliation bill is far more difficult than anything else I have seen.”

August nonfarm payrolls increased by just 235,000 last month compared with a Bloomberg survey prediction of 733,000 in job gains. The huge miss came after Biden’s poll numbers plummeted amid the chaotic U.S. withdrawal from Afghanistan and resurgent Covid-19 pandemic. A Washington Post/ABC News poll out Friday found Biden’s approval rating had dipped to 44%, down from 50% in June.

Biden urged Congress on Friday to get on with it.

September is the time for the House and Senate “to finish the job of passing my economic agenda so that we can keep up the historic momentum we’ve been building these last seven months,” he said before leaving the White House to view damage from Hurricane Ida.

That timeline depends on Democratic unity. Senate Majority Leader Chuck Schumer needs every Democratic vote in the 50-50 chamber to pass the tax and spending package in the face of solid Republican opposition. In the House, Speaker Nancy Pelosi can afford to lose no more than three Democratic votes.

Manchin should be “very persuadable” by the argument that the package as envisaged “adds nothing to the debt,” White House Chief of Staff Ron Klain said on CNN’s “State of the Union.”

Some House moderates also balk at the price tag, which itself represents a compromise with Senate Budget Committee Chairman Bernie Sanders, a Vermont independent, who initially sought $6 trillion.

After spending trillions on Covid relief, “we cannot afford to continue with this borrowing,” Representative Ed Case, a Democrat from Hawaii, said during the Natural Resources Committee vote on its portion of the bill.

But House progressives, such as Representatives Pramila Jayapal of Washington and Alexandria Ocasio-Cortez of New York, have threatened to block the infrastructure package if the reconciliation bill stalls. After Manchin urged a pause, Jayapal tweeted “Absolutely not.”

“Right now we have a massive game of hostage-taking as members protect their positions,” Manley, now a corporate communications adviser at APCO, said. “But at some point I have to believe they are going to realize the Biden administration is riding on getting this stuff done.”

David Axelrod, who was former President Barack Obama’s top political strategist, said many congressional Democrats also have to consider the impact on their own re-election bids next year.

“If they tank his domestic program, then what are they running on?” Axelrod said. “It’s not just Joe Biden that will suffer. They will suffer. And he’s got time to recover. They don’t.”

A senior House Democratic aide said party leaders remain optimistic about getting internal agreement on the bill by the end of the month, while acknowledging there are still a lot of hard policy decisions to make. Tax increases on the wealthy and corporations are popular with the public, the aide said.

After Friday’s jobs report top Democrats pointed to the fresh economic headwinds as a reason to pass their agenda now.

“This dent in our economic recovery makes bold investments in our physical infrastructure and making the economy work for every American even more necessary,” House Ways and Means Chairman Richard Neal, a Massachusetts Democrat, said.

Neal’s committee is likely to begin with less controversial elements like paid family leave and move on to prescription drug price controls, Medicare benefit expansion and tax policy by the middle of next week.

The tax portion of the bill will be the hardest. Biden’s calls for increasing the corporate tax rate and capital gains taxes are especially divisive in the party. But shelving the tax increases would mean the package adds to the deficit, something moderates like Manchin say they can’t support.

Lawmakers also will confront a massive lobbying campaign led by the U.S. Chamber of Commerce and other business organizations that argue the tax increases will further erode the economy.

While the budget process for the economic package calls for all House and Senate committees to draft legislation by Sept. 15, there’s no sign the Senate will meet that deadline.

Congress must also pass a stopgap spending bill to avert an Oct. 1 government shutdown and raise or suspend the federal debt ceiling or risk a default on federal obligations as soon as October. All of which adds to the challenges Democratic leaders have in uniting their party and rescuing Biden’s political fortunes.

“I don’t think failure is an option,” said Nadeam Elshami, a former Pelosi chief of staff. “Writing legislation is a messy business for sure. But at the end there is a view that Democrats just have to find their way forward.”