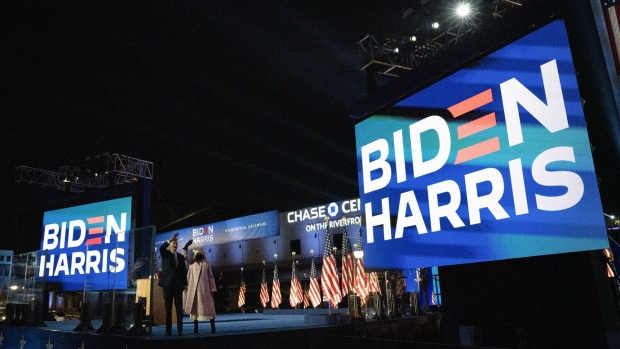 Democrats entered the U.S. election hoping for a repudiation of Donald Trump that would sweep them back to power in Washington. Instead, they were denied their “blue wave” by the president and congressional Republicans who defied polls to make races for the White House and Senate control too close to call.

The results left Democratic presidential nominee Joe Biden struggling for narrow victories in a handful of battleground states and the party’s chances of a winning a Senate majority all but out of reach.

Even House Speaker Nancy Pelosi was bracing for a reduction in her majority, as Republicans defeated one House chairman and a former cabinet secretary-turned-lawmaker.

And while Biden retains multiple paths to taking the White House, the 2020 election will once again prompt soul-searching for a party that is still struggling to grapple with the populist fervor Trump gifted the Republican Party.

They must consider how Trump was able to run so close to Biden despite the coronavirus pandemic and what looked like record-breaking voter turnout in much of the country. States that Democrats expected to be closely fought, including Florida, Ohio and Texas, were runaway victories for the president.

Trump rode unprecedented support among Latino voters in Miami and the Rio Grande Valley to wins in Florida and Texas, underscoring the appeal of his tough-on-socialism messaging as he fended off Democratic efforts to flip traditional Republican strongholds.

And aides credited Trump’s relentless focus on the economy - and willingness to campaign even after his own bout with Covid-19 - for endearing him to voters more worried about their pocketbooks than the pandemic.

A Biden win would paper over some of these shortfalls -- and exorcise the ghosts of Hillary Clinton’s loss to Trump in 2016 -- especially since he was able to improve on Clinton’s performance by winning Arizona, a state she lost.

He remained within striking distance in Georgia and Wisconsin - where a pair of victories would all but assure he won the White House - and won cities and suburbs that Democrats saw as essential.

But Biden’s decision to largely withdraw from the campaign trail and his inability to inspire enthusiasm among the Democratic base - beyond the potential of defeating Trump - offered little help to down-ballot members of his party.

Vulnerable Senate Republicans including Joni Ernst of Iowa and Steve Daines of Montana glided to reelection, while Susan Collins of Maine and Thom Tillis of North Carolina led their races, dimming any Democratic hopes of wrestling back control of the upper chamber. GOP House candidates knocked out influential Democrats, including House Agriculture Committee Chairman Collin Peterson of Minnesota and Donna Shalala, the former Secretary of Health and Human Services, in Florida.

Meanwhile, the presidential race threatened to stretch deep into the coming weeks, with Trump pledging to challenge the result to the U.S. Supreme Court early Wednesday morning.

“We will win this,” Trump told supporters at the White House. “And as far as I’m concerned, we already have won it.”

Without a clear result -- so far, anyway -- the election and its aftermath may be remembered by two of the defining characteristics of Trump’s first term: chaos and controversy.

Trump threatened a legal fight, saying his campaign wanted “all voting to stop” and saying that Democratic voters were “trying to disenfranchise” his supporters. Any aberration as votes are counted could trigger a more intense version of the legal battle waged in the 2000 Florida recount of the race between George W. Bush and Al Gore, which was ultimately decided in Bush’s favor by a conservative majority on the Supreme Court.

Biden, for his part, pledged patience, calling for all votes to be counted and saying he believed he would prevail. Later, his campaign manager issued a statement saying the president’s claims of victory were “outrageous” and “unprecedented” and vowing Democrats would fight any legal battle.

“We feel good about where we are, we really do,” Biden told supporters in Wilmington. “I’m here to tell you tonight we believe we’re on track to win this election.”

The two campaigns have for weeks plotted contingencies and their legal strategies. Trump said Sunday that if vote-counting wasn’t finished in Pennsylvania on Election Day, his lawyers would take action -- even though state law didn’t allow authorities to begin tabulating mail-in ballots earlier.

But if the race ends up hinging on a legal battle, Republicans may have an advantage.

The confirmation of Supreme Court Justice Amy Coney Barrett just over a week before Election Day has solidified conservative control of the Supreme Court, with three of the nine justices nominated by Trump and six of nine chosen by a Republican president. That could give the president the inside track if legal challenges related to any potential recounts wind their way to the high court, as they did in 2000.

Trump may also get a boost from political operatives comfortable with the asymmetric warfare a recount fight could involve - including veterans of the Bush-Gore recount, like American Conservative Union chairman Matt Schlapp or longtime associate Roger Stone. The president, who has long trafficked in grievance and conspiracy, has primed his supporters for the possibility of a prolonged fight. He frequently complained on the campaign trail that the election was fixed against him while refusing to say whether he would concede a race he lost.

And Trump has already proven more willing to politicize the results with a continued campaign, baselessly accusing Biden supporters of attempting to disenfranchise Republicans.

Both men will need to be cognizant of the deep toll a prolonged fight will likely take on a nation already beleaguered by the pandemic, recession and racial strife. Based on the ugly fight that unfolded in 2000, when the U.S. was far less politically polarized than now, a similar battle threatens to fray an already bitterly divided country.

“People don’t remember how nasty it was,” Princeton University historian Sean Wilentz said. “People just think of public-spirited citizens looking at punched ballots and trying to find a hanging chad -- that seems to be the big symbol of 2000. But it was nasty, and a lot of turmoil was going on.”

Still, an ultimate Biden victory could offer at least a temporary balm for wary Democrats, and there’s reason to believe he should be favored in Rust Belt states where he led consistently in the polls.

Biden also employs veterans of the 2000 recount, including Ron Klain, his former chief of staff who served as the Gore recount committee general counsel. In that race, Bush had an advantage as the outcome hinged on a recount in Florida, which was led by Republican Jeb Bush, the younger brother of the GOP presidential candidate.

This time around, Democrats control the governor’s mansions in the key states of Pennsylvania, Michigan, Wisconsin and Minnesota, giving the party a leg up as recount rules are implemented and litigated.

The former vice president also likely has a monetary advantage; his campaign had US$177 million in cash on hand at the beginning of October, versus just US$63.1 million for the president’s campaign.

Facing the prospect of losing the White House for the third time this century despite their candidate winning the popular vote, Democratic donors are likely to flood Biden’s campaign with whatever additional funds it needs to cover litigation costs.

“If the president makes good on his threat to go to court to try to prevent the proper tabulation of votes, we have legal teams standing by ready to deploy to resist that effort,” Biden campaign manager Jen O’Malley Dillon said in a statement Wednesday. “And they will prevail.”