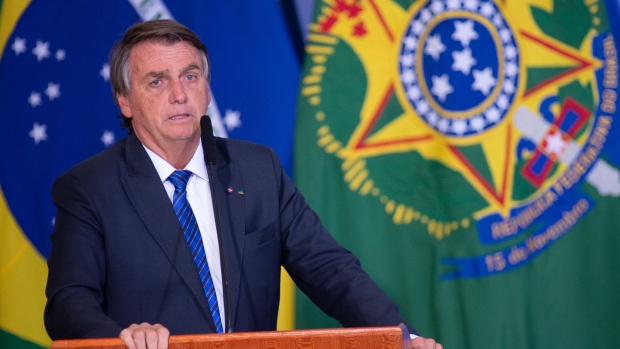 Jair Bolsonaro, Brazil's president, speaks during a press conference at Planalto Palace in Brasilia, Brazil, on Wednesday, May 25, 2022. Bolsonaro’s decision to fire a third chief executive officer at Petrobras shows just how crucial it is for the Brazilian president to avoid another increase in fuel prices that could all but kill his re-election chances in October. , Bloomberg

(Bloomberg) -- Brazil President Jair Bolsonaro said he and US President Joe Biden will have their first bilateral meeting next month after the South American leader agreed to attend a regional summit in Los Angeles, according to CNN Brasil.

The two leaders will hold a bilateral meeting to reestablish their relationship, Bolsonaro told the TV network in remarks reported on its website late Wednesday.

Former US Senator Christopher Dodd, who said he was sent by Biden to discuss a “shared agenda” for the meeting, traveled to Brasilia following reports that Bolsonaro considered skipping the summit to focus on his re-election campaign.

Bolsonaro’s office and the foreign ministry didn’t immediately respond to requests for comment.

Bolsonaro’s participation will provide a much-needed boost to the event, which has been touted by the US as a sign of its deep commitment to Latin America. The gathering, scheduled for June 6-10, risked flopping after Mexican President Andres Manuel Lopez Obrador threatened to skip it unless all Latin American leaders are welcome, including those from Cuba, Venezuela and Nicaragua.

The Brazilian president, who was a close ally of Donald Trump and visited him both at the White House and Mar-a-Lago during his presidency, has yet to speak with Biden since his inauguration. He was one of the last presidents to congratulate Biden on his victory in 2020.