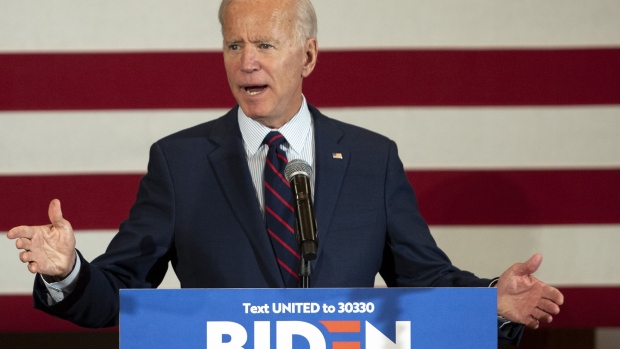 (Bloomberg) -- Democratic presidential front-runner Joe Biden called on chief executives of U.S. publicly traded corporations to not buy back any company stock this year as the nation battles the coronavirus pandemic.

In a tweet Friday, the former vice president said stock buybacks would hurt workers at a time when unemployment was rising dramatically.

“As workers face the physical and economic consequences of the coronavirus, our corporate leaders cannot cede responsibility for their employees,” he wrote.

Sentiment toward buybacks was souring long before Biden’s tweet, with both public criticism and U.S. companies seeking to conserve cash.

Eight big banks, including JPMorgan Chase & Co. and Bank of America Corp., vowed to stop repurchasing their own shares through the second quarter, saying they will focus on supporting clients and the nation during the pandemic. AT&T Inc. said Friday it is canceling an accelerated share repurchase agreement with Morgan Stanley to buy back $4 billion of shares.

Wall Street has been rife with predictions that buybacks would slow significantly this year amid flat profits among S&P 500 companies. U.S. corporations announced $122 billion of share repurchases in January and February, data compiled by Birinyi Associates Inc. show, the biggest drop to start a year since 2009.

“The era of aggressive stock buybacks is over for now except for the very best capitalized U.S. companies,” Nicholas Colas, co-founder of DataTrek Research, wrote in a recent note.