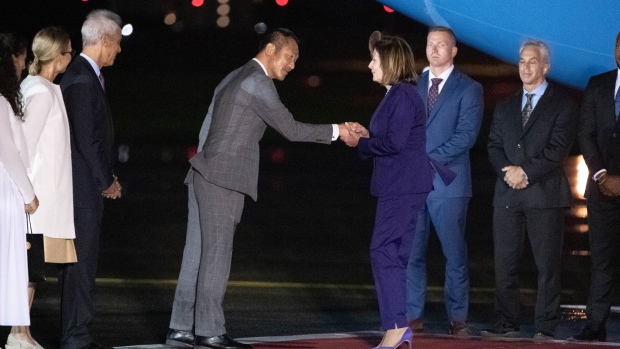 (Bloomberg) -- House Speaker Nancy Pelosi’s visit to Taiwan has made geopolitics with China “particularly complicated” as President Joe Biden weighs the future of tariffs on more than $300 billion in goods from the US rival, according to his commerce chief.

“Certainly, it has made it a little more challenging,” Gina Raimondo said in an interview on Bloomberg Television’s “Balance of Power With David Westin” on Wednesday. “It’s harder, but I am hopeful that we will get beyond that and get back to a place where we can have more of those discussions.”

Biden is considering what to do with the Trump-era tariffs and is weighing his options, Raimondo said. He is “very cautious” and doesn’t want to do anything that would hurt American workers, she said.

“But I know he’s looking at it. We’ve talked about it again recently, and I expect he’ll be making a decision before too long.”

Pelosi visited Taipei, Taiwan, last week in the face of threats and opposition from China, which regards Taiwan as part of its territory. She was the highest-ranking US politician to visit the island in 25 years, and Chinese officials called it “provocative.”

Former President Donald Trump imposed tariffs on more than $300 billion in Chinese imports from 2018 after an investigation concluded China stole intellectual property from American companies and forced them to transfer technology.

The duties covered goods including industrial inputs such as microchips and chemicals, and consumer merchandise such as apparel and furniture. While there’s been no direct indication of which duties may be removed, senior administration officials have said reducing tariffs on household items could help ease a surge in the US cost of living.

Consumer prices climbed 8.5% in July from a year before, down from the four-decade high of 9.1% in June, but still a pace that remains far faster than wage gains -- eroding households’ purchasing power.