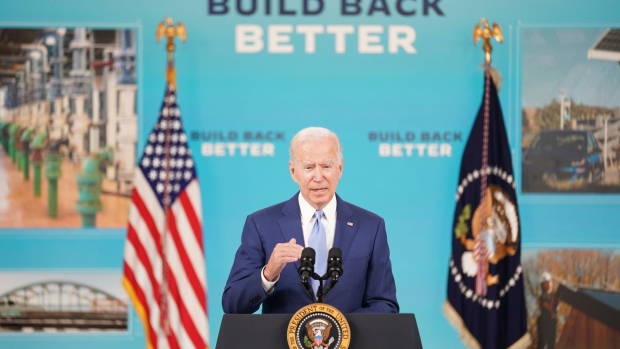 (Bloomberg) -- President Joe Biden celebrated a decline in the unemployment rate, even as U.S. job growth in September weakened to the slowest pace this year.

“Today’s report has the unemployment rate down to 4.8%, a significant improvement from when I took office and a sign that our recovery is moving forward, even in the face of a Covid pandemic,” Biden said Friday at the White House.

While the unemployment rate dropped to a pandemic low of 4.8%, that was partly because thousands of Americans -- especially women -- left the labor force and gave up looking for jobs, the Labor Department data showed. September’s report showed a 194,000 gain in payrolls, weaker than all but one of 71 forecasts in Bloomberg’s survey. Wages climbed as companies sought to lure workers.

The report, predictably, triggered a partisan reaction. House Speaker Nancy Pelosi said the release showed the need for a sweeping social-spending package Democrats are working on in Congress. That bill will provide jobs in health care, child care, education and clean energy, Pelosi said in her statement.

Republican lawmakers have, by contrast, argued that federal support will only undermine the incentive for Americans to take up job openings.

“We are in the midst of a worker shortage crisis and the number of potential workers is shrinking. Multi-trillion tax and spend proposals in Washington will only make matters worse,” U.S. Chamber Executive Vice President and Chief Policy Officer Neil Bradley said in a statement on the September jobs report.

Biden’s longer-term economic proposals have stalled in Congress, with progressive Democrats withholding support for a bipartisan infrastructure package pending a deal with moderates on the social-spending bill. The White House has been trying to broker a deal that weighs liberal policy priorities against centrist concerns about inflation and tax hikes.

“Turn on the news and every conversation is a confrontation,” Biden said. “Every disagreement is a crisis. But when you take a step back and look at what’s happening, we’re actually making real progress. Maybe it doesn’t seem fast enough.”

Consecutive months of sluggish job growth indicate a tug of war between employers -- starved for workers to meet demand -- and Americans who have been slow to return to the workforce. Nonetheless, school reopenings and the end of expanded federal unemployment benefits should lead to a pickup in hiring in coming months at a time when companies are boosting pay, economists argue.