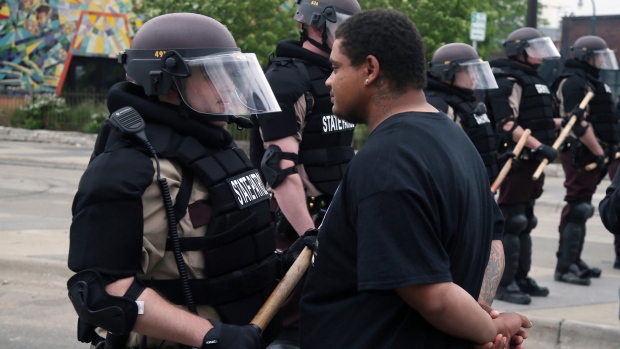 A protester goes face-to-face with a Minnesota state trooper Friday, May 29, 2020 after another night of protests over the death of George Floyd who died in police custody Monday in Minneapolis. AP Photo/Jim Mone

Joe Biden denounced the unjust treatment of African Americans and called Friday on Americans to take an active role in combating racism, as he assailed President Donald Trump’s leadership after a black man was killed in police custody in Minnesota.

Biden, the presumptive Democratic nominee, delivered brief remarks in a speech streamed live on his website, as he sought to draw a clear contrast with a series of inflammatory tweets from Trump suggesting that protesters in Minneapolis would be shot.

“We need to stand up as a nation with the black community, with all minority communities, and come together as one America,” Biden said. “The very soul of America is at stake. We must commit as a nation to pursue justice with every ounce of our being.”

On Monday, George Floyd, a black man, was killed in Minneapolis after a white police officer kneeled on his neck. On Friday, after days of sometimes violent protests, police officer Derek Chauvin was arrested and charged with murder.

Trump inserted himself into the protests with a series of early morning tweets in which he criticized the mayor’s handling of the protests and threatened to send in the National Guard, which is a state function, not federal. He then used a phrase coined by a Miami police chief in the 1960s about shooting looters.

“These THUGS are dishonoring the memory of George Floyd, and I won’t let that happen,” Trump wrote on Twitter. “Just spoke to Governor Tim Walz and told him that the Military is with him all the way. Any difficulty and we will assume control but, when the looting starts, the shooting starts. Thank you!”

Trump tried to walk back the remark after widespread criticism, tweeting that he was not seeking to stoke violence but rather stating that looting can lead to violence, which he wanted to avoid. He later said he had spoken to Floyd’s family and asked for an expedited federal investigation into the death.

“We all saw what we saw, and it’s very hard to even conceive of anything other than what we did see. Should never happen, should never be allowed to happen, a thing like that. But we’re determined that justice be served,” he told reporters.

But he also spoke out against violent protests.

“We can’t allow a situation like happened in Minneapolis to descend further into lawless anarchy and chaos. And we understand that very well. It’s very important, I believe, to the family, to everybody that memory of George Floyd be a perfect memory. Let it be a perfect memory. The looters should not be allowed to drown out the voices of so many peaceful protesters,” he said.

Although Biden didn’t mention Trump directly in his speech, he had harsh words for the president on CNN a few hours later.

“He is totally thoroughly wrong the way he is handling this,” Biden said. “It is not presidential.”

Biden also said that he had spoken with Floyd’s family and promised that he would work to seek justice for them. But the former vice president also drew a line from Floyd’s death to the recent killings of unarmed African-Americans in Georgia and Kentucky as well as other incidents of harassment and discrimination against blacks.

Biden’s appeal for racial healing comes a week after he was facing jibes from Trump on race. Biden had appeared on a radio show geared toward a black audience and said, “If you have a problem figuring out whether you’re for me or Trump then you ain’t black.”

The Trump campaign and its allies immediately seized on the comments, saying the comment was evidence Democrats take black voters for granted. It also launched a $1 million digital ad blitz to capitalize on the remark. Biden has apologized.

Trump’s campaign had been making a public push for support from black voters, forming “Black Voices for Trump,” last fall. Trump has also courted police unions as part of his base, suggesting a return to a time where harsher police tactics were legal.

“And when you see these towns, and when you see these thugs being thrown into the back of a paddy wagon, you just see them thrown in, rough. I said, ‘Please, don’t be too nice,’” Trump said in remarks to law enforcement in Brentwood, New York, in July 2017. “Like when you guys put somebody in the car and you’re protecting their head, you know, the way you put the hand over like, ‘Don’t hit their head!’ and they’ve just killed somebody -- ‘Don’t hit their head!’ I said, ‘You can take the hand away, OK?’”

Biden, whose candidacy was revived by black voters in South Carolina and remains extremely popular among older black Americans, said when he entered the presidential race last year that he did so in part because of Trump’s reaction to the white supremacists’ rally in Charlottesville, Virginia in 2017, when the president said there were “very fine people on both sides.”

On Friday, Biden tweeted that the president was “calling for violence against American citizens during a moment of pain.”

“This is no time for incendiary tweets,” Biden said in his remarks. “This is no time to encourage violence. This is a national crisis, and we need real leadership right now.”

“We have witnessed again the media’s relentless twisting of President Trump’s words, and the Democrats seizing on that, to take the entire nation down the worst road imaginable,” campaign manager Brad Parscale said. “A man has died, a police officer is charged with murder, an American city is in chaos, and Democrats and the media see only a political opportunity and a chance to make money. Their behavior is reprehensible and should be roundly condemned by all Americans.”

Trump’s original tweet, which was also reposted by the official White House account, was flagged by Twitter for violating its policies on “glorifying violence.” Twitter added a warning, but the company did not remove the tweets “given its relevance to ongoing matters of public importance.”