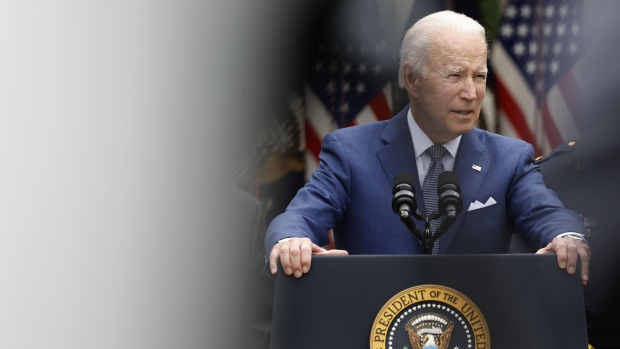 US President Joe Biden speaks during an event in the Rose Garden of the White House in Washington, D.C., US, on Friday, May 13, 2022. Biden this afternoon met with local elected officials and chiefs of police from cities that have benefited from using American Rescue Plan funding to increase spending on community policing and public safety programs, according to the White House. , Bloomberg

Speaking at a memorial event for police officers killed in the line of duty, Biden touched briefly on the shooter in Buffalo, New York, who killed 10 people and injured three others in what federal authorities are investigating as a racist hate crime.

“We must all work together to address the hate that remains a stain on the soul of America,” Biden told the audience of law-enforcement officials at the steps of the U.S. Capitol in Washington on Sunday.

A White 18-year-old man dressed in military gear who opened fire at a grocery store on Saturday was arrested in the Buffalo mass shooting. Police said 11 of the 13 people shot were Black. One of the dead was a former police officer working as a security guard who was killed by the shooter in an exchange of gunfire.

The Justice Department said it’s investigating the shooting “as a hate crime and an act of racially-motivated violent extremism.” The shooter, identified as Payton Gendron, previously threatened a shooting at his high school last June, Associated Press quoted a law enforcement official as saying.

The president called on cities, states and counties to use $350 billion in funds for law enforcement under the American Rescue Plan, which Congress passed in March 2021, “so they can keep cops on the job.”

“Spend it now, this summer, when crime historically spikes,” he said at the the 41st annual National Peace Officers’ Memorial service, which paid tribute to a record 129 law enforcement officers who died in the line of duty in 2021.

This year, there have been 198 mass shootings in the U.S., defined as four or more people shot, including events in Portland, Sacramento, New York City, and Pittsburgh, according to the Gun Violence Archive.

Biden had already ordered flags at government buildings to be lowered to half-staff on Sunday for Peace Officers Memorial Day. FBI statistics show 56 law enforcement officials died in accidents in 2021, and 73 died as a result of criminal acts.

Republicans have sought to blame Democrats for an increase in violent crime in recent years, viewing it as a campaign topic. Biden has targeted the proliferation of “ghost guns,” privately-made firearms without serial numbers, and has proposed more money for community policing.