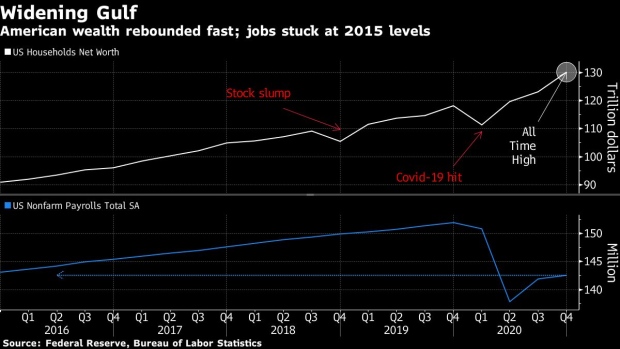 (Bloomberg) -- President Joe Biden’s economic team at the White House is determined to make good on his campaign pledge to raise taxes on the rich, emboldened by mounting data showing how well America’s wealthy did financially during the pandemic.

With Republican and business-lobby opposition to the administration’s tax plans stiffening, Democrats need to decide how ambitious to be in trying to revamp the tax code in what’s almost-certain to be a go-it-alone bill. Interviews with senior officials show there’s rising confidence at the White House that evidence of widening inequality will translate into broad popular support for a tax-the-wealthy strategy.

Biden himself has become convinced of the need, saying last week that those earning over $400,000 can expect to pay more in tax.

“2020 really did show him that there were so many of the fragilities across society” that need addressing, Heather Boushey, a member of the White House Council of Economic Advisers, said in an interview. Funding spending priorities given a shortfall in revenues from the 2017 Republican tax cuts “has really demanded the president sit down and think about both the enormous needs, and these questions we’re talking about as to how we tax,” she said.

Behind the scenes, aides have been working on a proposal to pay for some of the longer-term Biden agenda. Boosting income and capital-gains tax rates on top earners, along with levies on companies and an expansion of the estate tax, would help fund priorities such as infrastructure, climate change, and assistance for child care and home health care.

Lawmakers and the administration are stepping up discussions about what measures could pass later in the year. The Senate Finance Committee on Thursday will hold a hearing on the impact on employment and investment of the current U.S. international tax structure.

Senior members of the administration, including David Kamin, deputy director of the National Economic Council, and Lily Batchelder, who’s been tapped to become assistant Treasury secretary for tax policy, have been working for years on options to raise revenue from the best-off Americans.

Kamin, who with Batchelder mapped out potential reforms in a 2019 paper called “Taxing the Rich: Issues and Options,” signaled in an interview that the following options are among those under discussion:

“The idea of finally eliminating what is a massive loophole, in that the highest income Americans escape tax on their wealth by addressing step up in basis and then taxing capital gains as ordinary income, is a major reform of our system, which I think is needed,” Kamin said.

“These would be major accomplishments, which would pretty fundamentally shift how our tax system treats the richest Americans and the largest corporations so they can’t escape tax in the ways they now can,” he said.

The administration is also looking at rolling back a portion of former President Donald Trump’s income-tax cuts, aides say.

“Anybody making more than $400,000 will see a small-to-a-significant tax increase,” Biden said in an interview with ABC earlier this month. For those under that level, there won’t be “one single penny in additional federal tax,” he said.

Major aspects of the plan have yet to be detailed, including the specifics of the threshold for higher taxes. The White House clarified last week that the $400,000 figure applies to families, but Deputy Press Secretary Karine Jean-Pierre suggested Friday that the level at which tax hikes would kick in for individuals isn’t yet set.

“It’s a little early -- we’re still working out through the process,” Jean-Pierre said.

The so-called K-shaped recovery, in which wealthier Americans thrived even as low-income and many middle-class workers suffered from job losses, evictions, food insecurity and health risks associated with working in-person jobs during Covid-19, has reinforced the administration’s intentions.

The richest 1% of U.S. households added more than $4 trillion in wealth last year as stocks hit record highs and property values swelled, fueled in part by record-low interest rates. The bottom 50% saw their net worth gain by a much-smaller $470 billion -- and that was bolstered by the extraordinary income support provided in the March 2020 Cares Act.

A new paper from the left-leaning Economic Policy Institute showed that 80% of job losses in 2020 were concentrated among the lowest 25% of wage earners, while the workers in the top half of the distribution saw gains in employment.

“It is always true that recessions hit low- and middle-income people harder, but I have never seen anything like this,” said Heidi Shierholz, the institute’s policy director and a former chief Labor Department economist.

Republicans warn that higher taxes will hold back the recovery. The U.S. Chamber of Commerce says boosting levies on companies will “make the United States a less attractive place to invest profits and locate corporate headquarters.”

“Whatever the new normal is we return to after Covid-19, I think it is important for the government to stay as far out of the way as possible to allow the economy to find its footing,” said Chris Campbell, a former Senate Republican aide who served in the Treasury during the Trump administration.

Senate Minority Leader Mitch McConnell said last week there wouldn’t be bipartisan support for higher taxes, and predicted Democrats will use the reconciliation process -- which allows bills to pass the Senate with a simple majority -- for their proposals.

Biden’s current determination marks a shift in a decades-long political career with few episodes of pushing for higher taxes. On the presidential campaign trail he drew a distinction with liberal competitors’ plans for a wealth tax, and as vice president he cut a deal with Republicans in late 2012to make permanent 82% of the tax cuts originally passed by President George W. Bush.

But liberals are fully behind his efforts now.

“We have seen him propose, fight for, sign, and sell one of the most progressive pieces of legislation in three generations,” said Senator Elizabeth Warren in an interview, referring to the pandemic-relief plan. “There is momentum now for real change, and tax policy is a critical part of that change.”