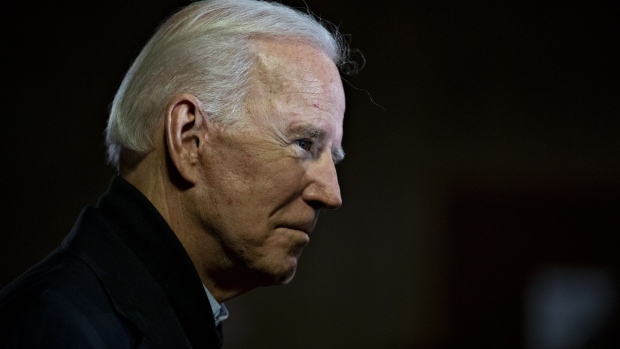 (Bloomberg) -- Democratic presidential candidate Joe Biden dismissed the suggestion that his rivals Elizabeth Warren and Pete Buttigieg are garnering real enthusiasm from voters during a blunt conversation with reporters Monday.

“You don’t see that with Warren. Stop kidding a kidder. OK, come on, man, give me a break,” Biden said of the Massachusetts senator, who’s drawing large crowds, though she’s fallen from her highs in state and national polls. “Look at the polling everywhere. OK. Tell me. Tell me where this great enthusiasm is manifesting itself.”

Biden also expressed skepticism about the rise of Buttigieg, the mayor of South Bend, Indiana, who’s captured the top spot in recent Iowa polls, saying “he doesn’t have the enthusiasm and the moderates.” Speaking of the mayor’s “Medicare for All Who Want It” health care plan, which like Biden’s would add a public option to the Affordable Care Act, Biden exclaimed: “He stole it!”

Biden, 77, is leading in most national and state polls other than Iowa and New Hampshire, his candidacy has raised concerns among some Democrats that he isn’t sparking enthusiasm in the same way as Buttigieg, Warren or Bernie Sanders.

Biden’s comments came the end of the third day of his eight-day “No Malarkey” bus tour across rural northern Iowa. For more than half an hour, he answered on-the-record questions more bluntly than he has during his campaign and showed more acuity than has come across in some of his public appearances.

Biden addressed a wide range of topics. He dismissed the suggestion that congressional Democrats should reconsider their impeachment push and settle for a censure of President Donald Trump. Instead, he said, the Democratic Party has to keep moving ahead even if it’s clear that Republicans who control the Senate won’t vote to convict Trump.

“I don’t think you have a choice. Imagine what you’d all be writing if after all this they said ‘well, we’re not going forward,’” he said. The media would “be eviscerating the Congress for not doing its job.”

He declined to divulge the details of his recent conversations with Obama and again insisted that he’s asked the former president not to endorse him or otherwise engage in the primary process. But he also said he doesn’t believe he needs Obama’s endorsement.

“I’ve been around in significant positions long enough to handle consequential issues that I didn’t need sort of a verification that the guy’s ready,” Biden said.

Asked about a recent report in Politico that Obama had told another Democratic presidential candidate that Biden had failed to forge “intimate” relationships with voters in Iowa, Biden said “there’s truth to it.”

He added that he had campaigned in Iowa since 2008 for other candidates and not himself, and this is the first of his three presidential bids in which he’s had the money and resources to run a big campaign operation in the state.

But he also challenged his former boss’s suggestion that he lacks close ties with voters.

Biden hinted that Pelosi, who’s expressed concerns about other Democratic presidential hopefuls’ embrace of Medicare for All, views his campaign favorably. “She’s good friend, she’s a supporter,” he said, stopping himself before repeating, “she’s a good friend.”

He said he last spoke to Pelosi at Congressman Elijah Cummings’s funeral in October and she gave him “friendly” advice about his campaign. “Her point is she thinks that more that I’m engaged in a conversation, the better things are,” he said, bemoaning 10-person debate stages that only allow for short answers. “Her comment to me was ‘Joe, just be you, just be Joe.’”

Biden said he sees an easy path to the Democratic nomination if he wins the Iowa caucus and a still credible shot should he fall short.

“If I were to win Iowa, I think it’s awful hard to stop me from winning the nomination,” he said. “If I were to come in, like, some of the polling has shown, you know, 5 points behind or 3 points behind or 7 points behind, I think I survive. I think I do well because of the depth of the support I have in the African American, Latino community and there’s not anybody so far, that has risen to the point where they can all of a sudden everybody in the community say ‘whoa, wait a minute.’”

To contact the reporter on this story: Jennifer Epstein in Washington at jepstein32@bloomberg.net

To contact the editors responsible for this story: Wendy Benjaminson at wbenjaminson@bloomberg.net, Max Berley