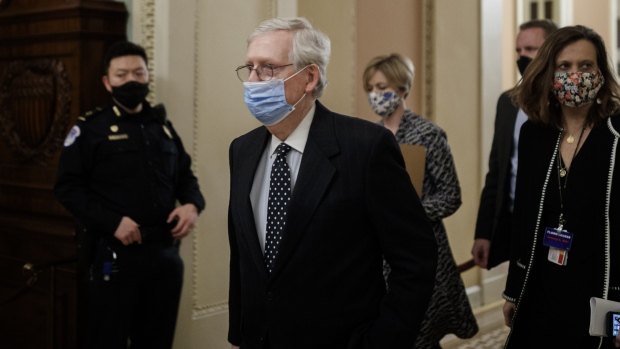 (Bloomberg) -- Joe Biden’s hope of turning the page on a chaotic chapter in American history with his Jan. 20 inauguration dissolved on Wednesday, with his own party’s efforts to punish Donald Trump poised to drag on through the earliest days of the new president’s administration.

Instead of shifting to Biden’s agenda and confirming his nominees for dozens of key positions, the Senate may be preparing to hold a trial for his predecessor after the House impeached Trump on Wednesday, making him the first U.S. president to suffer the rebuke twice.

Timing for the Senate to act isn’t clear, but Republican Leader Mitch McConnell rejected a call to convene the chamber in an emergency session and quickly start the trial. That means the proceedings almost certainly won’t begin before Biden is inaugurated.

Biden’s advisers, like other Democrats, see Trump as deeply damaged politically by the episode and understand the need to hold him accountable, people familiar with their thinking said. But they also worry that the trial will sidetrack Biden’s agenda, not only taking up the Senate’s time but also fueling deep divisions in the country that have led to violence and doomed bipartisan work on national policy priorities.

And with McConnell’s decision not to reconvene the Senate before Jan. 19, Biden faces the prospect of taking office without a single member of his Cabinet confirmed and in place.

Biden has largely refrained from wading into the debate over punishing Trump for his role in inciting the mob that stormed the U.S. Capitol last week, leaving at least five dead. As House Speaker Nancy Pelosi’s intentions became clearer, the president-elect proposed that the Senate “bifurcate” its schedule so it could continue work on confirming his nominees and passing a coronavirus relief bill even as it carried out Trump’s trial.

Biden said he was waiting for a ruling from the Senate parliamentarian on whether such an option would be possible; it isn’t clear whether that determination has been made.

During an impeachment trial, the Senate may require unanimous consent for any other actions including considering legislation, according to the nonpartisan Congressional Research Service. That would make it possible for even a single Republican senator to block other votes.

Pelosi may delay sending the impeachment article to the Senate until later this year, allowing Biden’s government to be put in place and his anticipated pandemic relief bill to be considered first. Or McConnell and the Democratic leader, Chuck Schumer, could strike a deal to vote on Biden’s appointments concurrently with the trial.

Pelosi declined to take questions in a brief appearance before reporters after the House voted 232-197 to impeach.

Biden’s allies say he and Democrats have no choice but to push ahead.

“Donald Trump is not the person he was a few days ago. He has been hurt irreparably,” former Senate Majority Leader Harry Reid said. “His power base has been weakened significantly. And I think that’s really a good thing for the country and for the world.”

Reid said that while he hasn’t spoken with Biden since before the attack on the Capitol, he’s come away from recent conversations with incoming White House chief of staff Ron Klain and incoming counselor to the president Steve Ricchetti confident that the president-elect understands the gravity of the moment and the need to act against Trump.

Biden might have been able to stop or slow the impeachment process last week, arguing that moving forward was more important than looking back as Democrats retake the White House and claim narrow majorities in both chambers of Congress. Instead, he left the decision to congressional Democrats, who chose to forge ahead.

“We’re going to do our job and the Congress can decide how to proceed with theirs,” he added.

Since then, momentum for impeachment and backlash against congressional Republicans who were supportive of the rioters has mushroomed. Ten House Republicans voted for impeachment, including the Liz Cheney, the GOP conference chairwoman and the party’s third-ranking leader in the chamber.

Major U.S. corporations, meanwhile, have announced that they will stop donating to lawmakers who last week voted against certifying Biden’s Electoral College victory.

“Even if some of Biden’s advisers had the instinct at first to try to stop this, I think they’ve been given courage to let this play out,” said Brian Fallon, a former top adviser to Schumer, who will become Senate majority leader next week after Biden and Harris are sworn in. “Support for some kind of accountability has surfaced from unanticipated corners, like corporate America signaling they’re not going to give corporate PAC checks to the House Republicans that voted to not certify the election results.”

Some Democrats, including Reid, are pushing for the trial to move rapidly, limiting it to only a few days.

“Impeachment is going to come and go away quickly,” Reid said. “I don’t think there’s any reason that it has to be cranked out over a period of weeks.”

But the impeachment push -- and its swift speed -- is not without its critics, even among Democrats.

West Virginia Senator Joe Manchin, a moderate who is expected to flex his muscle in the closely divided Senate, warned Monday on Fox News that a “rush” to impeach Trump would be “ill-advised” as Biden takes office. The president-elect has the goal of “trying to heal the country, trying to be the president of all the people,” he noted.