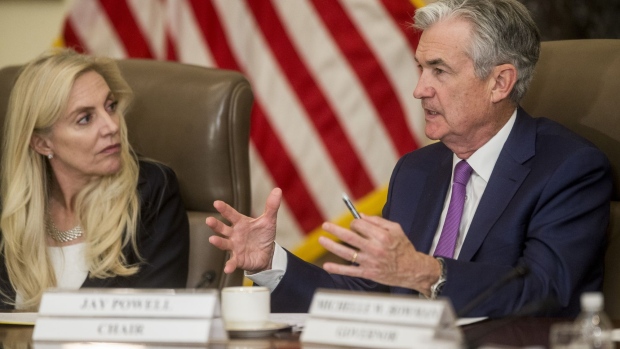 (Bloomberg) -- President Joe Biden has a tough decision in choosing the next Federal Reserve chair: Play it safe by giving Jerome Powell a second term or take a chance on a liberal like Lael Brainard, who would please progressives in Congress yet potentially agitate Wall Street.

Either path offers speed bumps for the White House. Powell would likely sail to Senate confirmation, giving the Biden administration a significant bipartisan win. Financial markets would likely remain calm, but Biden would likely disappoint some progressive Democrats he needs for other issues.

A liberal nominee, like Fed Governor Brainard, who hews more closely to Biden’s economic agenda and is far more of a hawk on banking regulations, would likely keep Democratic senators like Elizabeth Warren and Banking Chair Sherrod Brown happy. Yet it would presage a bruising confirmation fight, potentially even a 50-50 vote with Vice President Kamala Harris the tie-breaker.

Powell’s term ends in February, and there are several other openings pending on the central bank’s governing board, giving Biden a chance to put his stamp on the Fed, remaking it after former President Donald Trump’s five picks.

Besides Powell, Biden must also replace the vice chair for supervision, who oversees bank regulations, a position now held by Randal Quarles; the vice chair, a post now held by Richard Clarida, and an open seat on the Fed board, left vacant when Judy Shelton, a Trump nominee, failed to win Senate confirmation.

While many senior Democrats have praised Powell, unified Democratic support isn’t a slam dunk. Brown and Warren have declined to say whether they would back him for another term, with both sharply criticizing Powell’s handling of financial regulations on issues like bank stock buybacks.

Senate Finance Chairman Ron Wyden of Oregon had high praise for both Powell and Brainard, and has met with both of them recently. He has backed Powell’s handling of the economic crisis, while he praises Brainard’s view of the economy.

“I’ve been very impressed with her,” he said Thursday. “I think she is one of those economic leaders who is looking at ways to make sure there are more high-skill, high-wage jobs, and do it with a very strong sense of fairness, and giving everybody a shot, and I like that and that’s what I’m looking for,” Wyden said.

Some White House aides are eyeing Brainard as a possible chairman who -- while remaining independent -- already believes fully in Biden’s economic agenda, while others back Powell, according to people familiar with the matter. Biden considered Brainard for secretary of the Treasury, where she served in a senior capacity in the administration of then-President Barack Obama, before he appointed her to the Fed board.

For now, the White House is unlikely to make any decisions on Fed personnel until at least September. Biden has promised bipartisanship, but he also faces a ticking clock with the 2022 midterm elections likely marking the end of Democratic control of Congress if history is any guide.

One Republican familiar with the process said the path of least resistance for Biden is clear: Reappoint Powell and offer Quarles’ vice chairmanship to Brainard in a nod to liberals’ concerns. The Republican said markets seem to have priced in a Powell renomination and they’d have to process naming somebody else.

Brown said he is most dissatisfied with Quarles and “how the Fed has been too weak on regulation,” but is primarily focused on the current opening that Shelton was nominated for.

Republican senators are fairly sold on Powell, appointed to the chairmanship by Trump and confirmed with bipartisan support from 84 senators. But that comes with a warning that they want him to speak out against Biden’s spending and tax plans, sound a louder alarm on inflation and stay out of issues like social justice and climate change. Some have also been pushing for him to act sooner on issues like tapering the Fed’s asset purchases.

But GOP senators roundly praise Powell for shepherding a series of regulatory rollbacks in recent years.

“You’re going to create a lot of concern on the part of Republicans for somebody other than Powell,” said Republican Senator Thom Tillis of North Carolina, a state with a big banking hub. Tillis, who serves on the Banking Committee, predicted Powell could be confirmed with more than 70 votes in a Senate where Democrats only control 50 votes.

“He’s the best possible nominee that we could have in the role, and every other one would be a step back from the progress we’ve made over the last three or four years,” Tillis said.

Brainard has dissented on many of the majority votes on bank regulation by Powell and Quarles. She’s also voted against a handful of bank mergers the Fed approved in recent years.

The Powell Fed has backed massive support to help the economy heal from Covid-19, which Brainard has fully endorsed, and their views on monetary policy are similar. Brainard, though, has staked out a different approach toward financial regulation and the adoption of a central bank digital currency. Just last week, Brainard said she’s much more inclined to use regulatory tools to head off financial excesses like asset bubbles than Powell has been.

Even with broad support, Powell could see some opposition from the GOP, given Republicans plan to make rising prices a centerpiece of their push to retake control in the 2022 congressional elections.

Senators like Rick Scott of Florida, who chairs the GOP’s campaign committee, say they have been sharply disappointed with the Fed’s handling of inflation in recent months.

Braun said Powell was “between a rock and a hard place,” given he needs Biden to renominate him, and said his own vote would depend on the issues surrounding it at the time. “He’s straddling a real narrow passage to being in the same job down the road.”

Republican Kevin Cramer of North Dakota pressed him in a recent committee hearing on Biden’s spending and inflation and said he didn’t get the answer he wanted.

“I supported him when Donald Trump was beating up on him pretty hard, wanting negative interest rates, and I supported his independence,” Cramer noted. “Now it kind of looks to me like he might be yielding to sort of natural political tendencies.”

That said, “it’s hard for me to imagine the Biden administration nominating somebody to be the chair of the Federal Reserve that would be better than Jay Powell.”

Warren reiterated how crucial she sees the Fed chairmanship when asked again about her views on Powell last week.

“The Fed chair has two jobs. One is monetary policy, but the other is regulation. That’s the part that keeps us safe. And it requires significant independence from the big financial institutions, so it’s an important issue for me.”

She demurred when asked if Powell could do anything to win her backing before a confirmation vote.

“I have raised questions about regulation since his nomination hearing, and I will continue to raise those questions,” she said.

Senate Budget Chairman Bernie Sanders also wouldn’t show his hand when asked about the Federal Reserve post. Sanders voted against Brainard’s confirmation to her current post, and Sanders has previously been a sharp critic of free trade deals Brainard worked on in previous Democratic administrations.

Wyden said he won’t pressure the White House either way.

“I trust Joe Biden’s judgment on this issue,” he said.