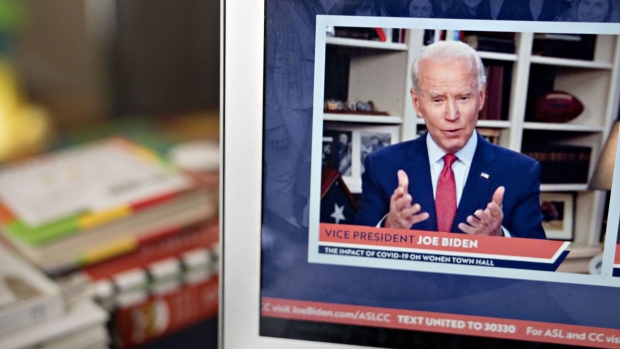 Former Vice President Joe Biden, presumptive Democratic presidential nominee, speaks during a virtual event seen on a laptop computer in Arlington, Virginia, U.S., on Tuesday, April 28, 2020. Clinton endorsed Biden today saying that she wishes he were in the White House to lead the country through the coronavirus pandemic. Photographer: Andrew Harrer/Bloomberg , Bloomberg

(Bloomberg) -- Joe Biden’s campaign doesn’t have any staff in Arizona, a state many Democrats believe would give him a clear path to victory over President Donald Trump. He also hasn’t campaigned there, even virtually -- while Trump has been to the state twice since mid-February.

Biden’s campaign promises to make up ground quickly by adding staffers in coming weeks. And while the slow start might make Democrats anxious, polling shows that the former vice president is leading Trump in a possible Sun Belt antidote to the Democrats’ Rust Belt disappointments of 2016.

Still, David Lujan, a former Democratic state legislator who now runs the Arizona Center for Economic Progress, said Trump’s incumbency has given him a head start that Biden must overcome.

The president has “been here several times over the last several years,” Lujan said. “I think that’s helped him build that ground presence. He definitely has that advantage. That doesn’t mean Biden can’t catch up to him.”

The episode has echoes of Biden’s ground-game stumbles during the primaries that had some analysts saying he was finished -- until his turnaround victory in South Carolina.

And the very groups Biden is counting on to win in the state -- Latinos and young people -- are the ones that often require a great deal of organizing muscle to turn their vast numbers into votes.

Trump won Arizona over Hillary Clinton in 2016 by 3.5 percentage points, but Biden has led in every 2020 poll in the state, with a four-point lead now over the president, according to the RealClearPolitics average of Arizona state polls. Since Clinton’s loss, Democrats have won a Senate seat and three other statewide races in the state.

A Biden victory there would be the first for a Democratic presidential nominee since Bill Clinton in 1996.

Democrats are particularly upbeat about Biden’s chances because former astronaut Mark Kelly is viewed as a strong challenger against Republican Senator Martha McSally, a former Air Force fighter pilot seen as one of the Republicans’ most endangered incumbents. Kelly is the husband of former Representative Gabrielle Giffords, who was severely injured in a 2011 assassination attempt in a supermarket parking lot outside Tucson that also left six people dead.

“This state is likely to turn blue, and it’s more likely to turn blue than some of the traditional Midwest states that used to be considered battlegrounds,” said Arizona Representative Ruben Gallego, who endorsed Biden in March. “The vice president has been able to put the coalition together to actually win this state, which is a combination of traditional Democratic Latino voters and swing suburban voters, largely white females.”

But the staffing disparity early in the general election season is stark. The joint Republican field effort between the party and the Trump campaign, known as the Trump Victory effort, has 70 staff in Arizona, including senior leadership, according to Rick Gorka, a spokesman for the Republican National Committee.

“Joe Biden has zero presence in Arizona,” Gorka said. “That’s borderline malpractice. You can’t just parachute in and expect to win. You have to build relationships. This is not a blue state. Hillary Clinton tried to expand the map in 2016 and got walloped.”

A joint effort by the state and national Democratic parties, called Mission for Arizona, said it has full-time staff members working on communications, outreach and at least 25 organizers on the ground as part of its Organizing Corps 2020, which places field organizers in eight battleground states.

Jen O’Malley Dillon, Biden’s campaign manager, told reporters last week that Arizona would be a major focus for the campaign and leadership and organizing staff in battleground states would be in place by June. The campaign also pointed to Arizona virtual events held with surrogates, including Jill Biden, who did three last week.

“I’m bullish on Arizona,” O’Malley Dillon said, though the Biden campaign declined to comment further on plans to invest in the state.

Also, strategists insist it’s too early for on-the-ground presence to matter — especially during a pandemic — and Biden has time and the right message to follow the successful Democratic playbook that led to Krysten Sinema’s victory over McSally in the 2018 Senate race.

Democratic excitement about Arizona stems from demographic changes — a growing Latino population and an influx of younger, mostly college-educated voters from neighboring states like California — and the rise of anti-Trump sentiment in places like Maricopa County, which includes the sprawling Phoenix suburbs.

Those trends, combined with electoral success in the 2018 midterm elections, has resulted in political donations flowing into the state, particularly to Kelly’s Senate campaign, which has raised more than $30 million and built an expansive organization.

Kelly leads McSally by 9 points, according to the RealClearPolitics polling average. O’Malley Dillon said the Biden campaign plans to “extensively” coordinate with Kelly and other statewide campaigns.

She also said they plan to target swing voters who supported Mitt Romney in 2012 -- when Biden and President Barack Obama were seeking re-election -- and flipped to Clinton in 2016.

“Biden has got the credentials, the track record, the tone, the biography to do what Krysten did, which is convince some of these independent and soft Republican voters who maybe have a little bit of Republican muscle memory that they’re needing to overcome,” said Andrew Piatt, who managed Sinema’s Senate campaign.

Still, Trump has his sights on the state. Earlier this month, he flew to Phoenix to visit a Honeywell factory producing respirator masks, an event that was billed as an official visit but had a campaign-style air. He eschewed the usual “Hail to the Chief” entrance and took the stage to “God Bless the U.S.A.,” a favorite for his rallies, and praised his 2016 victory in the state. Just before the shutdowns, Trump also held a campaign rally in Phoenix on Feb. 19.

Yet some Democrats say the president’s focus on Arizona, long a Republican bastion, may indicate growing Republican concerns about holding onto the state and its 11 electoral votes.

“The fact that Trump is having to spend as much time here is pretty indicative of the problems he faces,” said Chad Campbell, a Democratic strategist in Arizona. “He’s trying to keep his base motivated, and that’s a problem for the Trump campaign.”