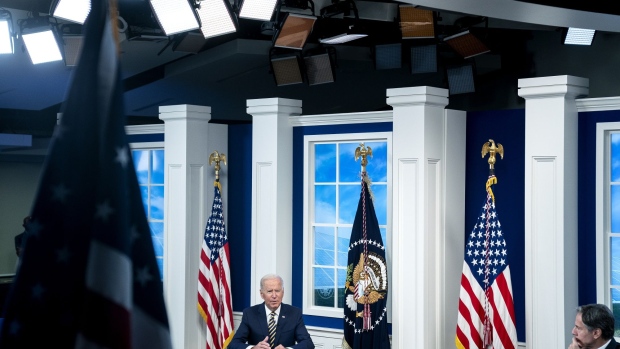 Joe Biden has embraced climate action as no other U.S. president has, with promises to rapidly cut carbon from power grids and shift to electric cars. That would—potentially—put the country responsible for more than a quarter of greenhouse gas on the brink of dramatic decarbonization.

But U.S. negotiators arriving in Glasgow for COP26 could turn up with almost nothing to show other than earnest pledges of action. A $2.5 billion down payment in funding to help poor countries fight climate change, one of the high-stakes objectives of this year’s talks, is unlikely to clear Congress by the start of the summit. There could be little tangible evidence on the global stage to prove Biden can lead the way forward.

Back at home, other initiatives aren’t yet looking much greener. Federal regulations to stifle emissions from automobiles, oil wells and power plants are moving slowly. And lawmakers are still deliberating so-called budget reconciliation legislation that would devote hundreds of billions of dollars to spurring renewable energy, propelling clean transportation, and weaning utilities off fossil fuels.

“The ballgame is really riding on this reconciliation bill,” says John Podesta, who served as a senior counselor to former President Barack Obama. “If he comes up empty handed,” he adds, “he goes with a very weak hand into Glasgow.”

It’s an unenviable scenario for Biden. He’s already struggling to overcome a trust deficit created by former President Donald Trump, who withdrew from the Paris Agreement and dismantled policies that might have delivered promised emissions cuts. And American credibility on climate has long been viewed skeptically, with lingering distrust ever since the country’s 2001 withdrawal from the Kyoto Protocol, one of the earliest United Nations-backed climate agreements.

“We cannot be ahistorical here. The U.S. has a lot of ground to make up,” says Rachel Cleetus, a climate and energy policy director with the Union of Concerned Scientists. “It’s not enough to just do your best and show up. We really have to show that our best is credible and then deliver on the promises we make.”

Biden and his special presidential envoy for climate, John Kerry, have spent months shoring up U.S. pledges and pursuing diplomatic agreements to take to COP26. Biden’s initial commitment in April to spend some $5.7 billion annually on climate finance was panned as a paltry showing from the world’s largest economy (and second-largest greenhouse gas emitter). Then he doubled down at the UN General Assembly meeting in September, promising twice that amount annually by 2024.

That shift was essential to increase the odds of a successful summit — and diffuse potential blame on Biden if COP26 falls short of expectations. U.S. climate negotiators are acutely aware that a poor showing by the U.S. gives ammunition to countries reluctant to take climate action.

“They undershot in April on the finance front, and they course corrected,” says David Waskow, director of the World Resources Institute’s International Climate Initiative. “The U.S. had to get that off the table, because they would have never heard the end of it.”

Other concerns can’t be so neatly addressed. Biden’s room to maneuver on climate talks at the Group of 20 summit, held just before the even bigger talks in Glasgow, will be constrained by a harsh political reality in Washington. Many of his commitments depend on forcing initiatives through a narrowly divided Congress, and a few key members of his own political party — including Senator Joe Manchin of gas- and coal-flush West Virginia — aren’t budging.

Those limitations have already helped sink climate negotiations at the Group of Seven meeting in June, which ended without consensus on phasing out the domestic use of coal. Biden may have vowed to decarbonize the entire U.S. electric system by 2035, but he couldn’t risk alienating Manchin at a delicate moment by moving further against coal. Those concerns haven’t gone away.

“They don’t want to upset the apple cart by poking Joe Manchin in the eye,” says Alden Meyer, a senior associate with research group E3G. “The world has become painfully familiar with our constitutional system.”

In the weeks before COP26, Biden struggled to get the narrowly divided Congress to pass his multi-trillion-dollar Build Back Better reconciliation bill, which contains clean energy investments aimed at fulfilling the U.S pledge to slash emissions 50% to 52% below 2005 levels by the end of the decade.

Wherever the bill stands during the summit — total collapse, framework agreement, or, most likely, still mired in debate — Biden and Kerry need to show Biden and Kerry need to show they have a path forward on climate, said Jake Schmidt, international climate policy director for the Natural Resources Defense Council.  “It’s going to be hard to convince other countries to move forward if there’s not some sign from the administration that they’ve got other strategies,” he said.

The fallback plan includes major federal regulations to pare emissions, such as a new U.S. mandate to curb the production of hydrofluorocarbons imposed in September. Activists want Biden to to commit to critical requirements on power plants, cars and oil, even though regulators won’t be finished before COP26.

U.S. negotiators can also point to efforts by states, local governments, businesses and other subnational actors that have continued greening without federal involvement. “Most of our regulation of utilities, most of our transportation planning and building codes — stuff that really affects emissions — is not done in Washington, it’s done in the states and the regions and the cities,” Meyer says.

Another key for Biden will be proving that planned U.S. actions are durable. “Everybody’s tired of whiplash,” Cleetus says. “This is about really showing a true commitment to doing differently and doing better going forward.”

Biden’s opportunity to reset the U.S. relationship with the world on climate is hanging in the balance. “The entire world is saying, ‘We want the U.S. to lead, but your words ring hollow—we’re watching your feet,’” says U.S. Rep. Sean Casten, who co-chairs the New Democrat Coalition Climate Task Force. “They simply question whether our form of government is capable of rising to this moment.”

Biden’s commitment to greater ambition — and diplomatic efforts by Kerry, who has traveled around the globe in pursuit of new climate deal  — will help insulate the president from blame if COP26 falls short of expectations. Just by ratcheting up U.S. finance and emissions pledges, he has shifted pressure on to  China, India, Italy and other nations seen as under-delivering. “He’s a little immune — not completely — from any scapegoating,” Schmidt says.

Still, any signs of failure in Glasgow would further diminish Biden’s standing with U.S. progressives already upset by his willingness to negotiate with moderate Democrats like Manchin over his climate priorities. Disappointments also would ripple beyond Washington, impairing Biden’s efforts to use climate to burnish U.S. standing in the world.

“It will deflate U.S. credibility,” Podesta says, warning that a meek showing from the U.S. could accelerate backsliding by countries such as Brazil on previous commitments and scuttle the chances of India making ambitious promises for clean power. “A loss here means a loss of global ambition, and that’s catastrophic.”