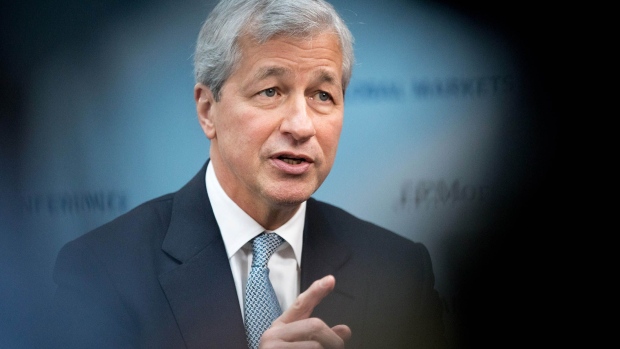 Jamie Dimon, chief executive officer of JPMorgan Chase & Co., gestures while speaking during a Bloomberg Television interview in Paris, France, on Thursday, March 9, 2017. Dimon said President Trumps economic agenda has ignited U.S. business and consumer confidence and he expects at least some of the administrations proposals to be enacted. , Bloomberg

Gap Inc. CEO Sonia Syngal and Lowe’s Cos. CEO Marvin Ellison will also attend the Oval Office meeting Tuesday afternoon to discuss “the critical need for the American Rescue Plan to save our economy,” the White House said.

Treasury Secretary Janet Yellen and Vice President Kamala Harris will also be present, along with Tom Donohue, CEO of the U.S. Chamber of Commerce.

Endorsements from major U.S. business leaders could help Biden garner Republican support for his stimulus, though the White House has indicated it is prepared to pass the bill through Congress with only Democratic votes. Congressional Democratic leaders have laid groundwork to move the legislation using a procedure that would require only simple majority support in the Senate, rather than the 60 votes normally needed to end a filibuster.

The Chamber of Commerce, one of the most powerful lobbying groups in Washington, has traditionally aligned itself with the GOP, but pivoted last year to begin working more with Democrats after clashing with the Trump administration over its protectionist trade measures. McMillon is also chairman of the Business Roundtable, another influential lobby in Washington.

White House Press Secretary Jen Psaki suggested Biden wouldn’t specifically ask the leaders to officially throw their support behind the plan, instead casting the meeting as a chance for the president to lay out the specifics of his proposal and get feedback.

The biggest U.S. banks, including JPMorgan, have recently faced complaints that their scaling back of consumer lending has hurt businesses and households still struggling in the pandemic-battered economy. Psaki indicated Biden would not raise those issues with Dimon or other executives and instead would keep the discussion focused on his stimulus plan.

Biden kicked off talks last week at the White House, where he met with a group of Republican senators who proposed a stimulus one-third the size of his plan. While both sides spoke optimistically about working together, Biden has since said he is not interested in scaling back his proposal. Liberal Democrats and progressive groups have pressured Biden not to give in to Republican demands.

“If I have to choose between getting help right now to Americans who are hurting so badly and getting bogged down in a lengthy negotiation or compromising on a bill that’s up to the crisis, that’s an easy choice,” Biden said Friday. “I’m going to help the American people who are hurting now.”

Senator Rob Portman of Ohio, one of the Republicans behind the smaller virus package, said Tuesday it is “too bad” Biden seems interested in pushing forward without GOP lawmakers’ support.

”I’m discouraged that the current administration seems not to be interested in pursuing the bipartisan solution,” Portman said during a confirmation hearing for Neera Tanden, Biden’s pick to lead the White House budget office. “Good ideas come from both sides of the aisle, as we have found out in the previous five COVID-19 packages that we have passed in this Congress.”

--With assistance from Jenny Leonard and Justin Sink.