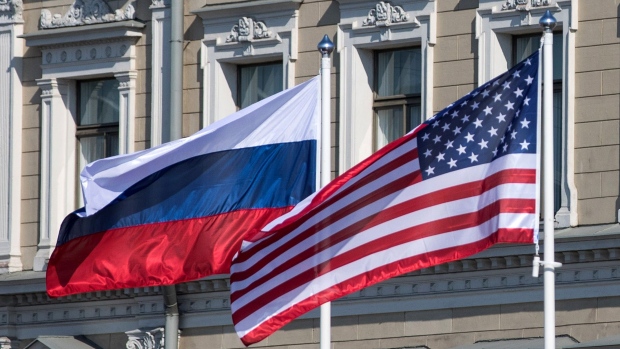 A Russian national flag, left, an American national flag, center, and a Finnish national flag fly outside the Presidential Palace in Helsinki, Finland, on Monday, July 16, 2018. U.S. President Donald Trump prepared to meet Russian President Vladimir Putin in Helsinki on Monday, under pressure to confront his Russian counterpart over Kremlin meddling in the 2016 election and with concerns rising that the U.S. is abandoning the current international order. Photographer: Chris Ratcliffe/Bloomberg Economics , Bloomberg

The Biden administration imposed a raft of new sanctions on Russia, including long-feared restrictions on buying new sovereign debt, in retaliation for alleged misconduct related to the SolarWinds Corp. hack and efforts to disrupt the U.S. election.

The Biden administration is barring U.S. financial institutions from participating in the primary market for new debt issued by the Russian central bank, Finance Ministry and sovereign wealth fund. Those limits would take effect from June 14.

Russian bonds fell and the ruble dropped the most since December on news of the impending penalties, although the ruble and Russian bonds recovered some of their losses after the sanctions were announced.

“What President Biden is going to announce today, we believe, are proportionate measures to defend American interests in response to harmful Russian actions, including cyber intrusions and election interference,” National Security Advisor Jake Sullivan told CNN early Thursday. “His goal is to provide a significant and credible response but not to escalate the situation.”

The sanctions reflect an attempt by the U.S. to balance the desire to punish the Kremlin for past misdeeds but also to limit the further worsening of the relationship, especially as tensions grow over a Russian military buildup near Ukraine.

The latest moves come just two days after President Joe Biden warned Vladimir Putin the U.S. would defend its interests but also offered the possibility of a summit meeting in the coming months, drawing a cautiously positive response from Moscow. Biden, who warned Putin of U.S. actions this week, wants to meet with the Russian leader to prevent relations between the two countries from deteriorating further, a U.S. official said.

Several of the sanctioned entities have links to Yevgeny Prigozhin, a Russian businessman dubbed “Putin’s Chef” for his Kremlin catering contracts and close ties to the president. He controls the Wagner group of mercenaries that fought in Syria and Libya, and deployed to hotspots in Africa and Latin America in support of Kremlin policy.

The U.S. Treasury has already sanctioned media outlets and other companies linked to Prigozhin in December 2018 and last September. Prigozhin has been under U.S. sanctions since late 2016. Notably, the new measures didn’t target any new tycoons, something that many in Moscow had feared.

Restrictions, like those announced Thursday, blocking U.S. investors from buying ruble-denominated Russian government debt have long been seen as the “nuclear option” in financial markets, where the bonds, known as OFZs, have been a popular investment. Foreigners now hold about a fifth of that debt, worth roughly US$37 billion. 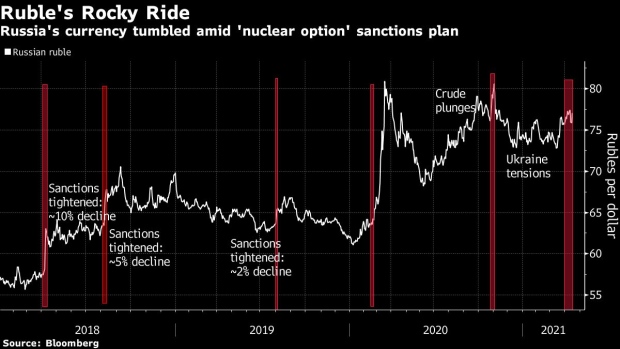 But restricting the new limits to new debt sales, and not trading on secondary markets, will blunt the impact. Russia’s 10-year local bonds fell the most since March 2020 in early trading in Moscow, before paring that decline, while the ruble, which had rallied on the news of the Biden-Putin phone call, was down 0.7 per cent as of 4:45pm in Moscow.

An executive order signed by Biden gives additional authorities to act against Russia that the U.S. isn’t exercising immediately and would prefer not to have to use, an administration official said.

Also Thursday, an American official said the U.S. found with low to moderate confidence that Russian intelligence officers offered bounties in 2019 to encourage Taliban to attack American and coalition personnel in Afghanistan. The sanctions aren’t specifically tied to that intelligence.

Russia summoned the U.S. Ambassador for what Foreign Ministry spokeswoman Maria Zakharova said would be a “difficult conversation” after the announcement. She vowed an “inevitable” response from Russia but didn’t elaborate on what measures would come.

A senior Russian official, speaking on condition of anonymity to discuss matters that aren’t public, called the new debt restrictions the least painful option since they don’t affect the secondary market.

Responding to initial reports of the planned sanctions, Kremlin spokesman Dmitry Peskov said they “wouldn’t facilitate” the planned summit but stopped short of saying they would derail it.

“The sanctions were moderate and I hope the reaction will be,” said Andrey Kortunov, head of the Kremlin-founded Russian International Affairs Council. “Russia’s response shouldn’t hamper the summit. People understood that sanctions were inevitable.”

In a potentially conciliatory gesture, the U.S. this week dropped plans to send two warships into the Black Sea after Russia warned the move would be “extremely provocative.” Kremlin spokesman Peskov said it would be “premature” to speak of de-escalation of tensions with Ukraine.

The U.S. has been threatening to impose additional restrictions on Russia for months to punish the Kremlin for a litany of transgressions in recent years.

A U.S. intelligence community assessment has concluded with a high degree of confidence that Putin and the Russian government authorized and directed an effort to influence the 2020 election. Some of the new measures are aimed at outlets controlled by Russian intelligence services and blamed for sowing disinformation during the 2020 campaign, according to one of the people. Others targeted include individuals and entities that operate outside Russia at the behest of Moscow.

The sanctions follow a review ordered by Biden on his first full day in office into four key areas concerning Russia: interference in the 2020 election, reports of Russian bounties on U.S. soldiers in Afghanistan, the SolarWinds attack and the poisoning of Russian opposition leader Alexey Navalny.

The administration announced sanctions against Russian officials over Navalny last month but has so far held off on action in the other three areas.

Russia has repeatedly rejected accusations that it meddles in elections, poisons its critics or offered to pay bounties for the killing of American troops.

Those hit by this round of sanctions include individuals and entities blamed by the U.S. for enabling the Internet Research Agency, a Kremlin-linked troll farm that used a coordinated operation on social media in an effort to help Donald Trump’s presidential campaign in 2016.

Actions in response to the malicious SolarWinds cyber activity target about half a dozen entities linked to Russian security services. The U.S. also named the Russian Foreign Intelligence Service as the perpetrator of the campaign.

The attack by hackers who compromised widely used software by Texas-based SolarWinds breached more than 100 U.S. companies and nine government agencies before it was discovered by a cybersecurity firm.