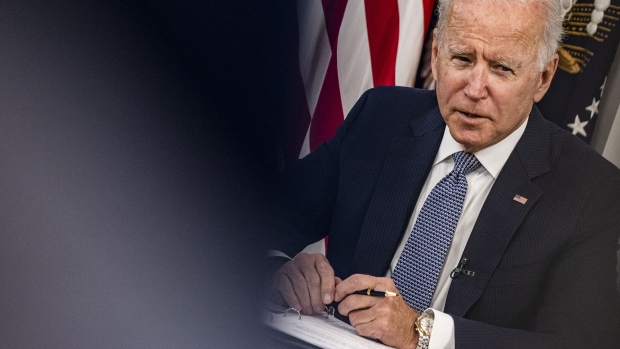 Biden seeks to show he’s following through on his pledge to continue fighting for the legislation, called Build Back Better, according to a White House official. The bill would direct billions to fight climate change and to social programs including child care and early education.

Ten business leaders who support the bill will join the president Wednesday at the White House to explain how they see the measure boosting American businesses and the economy, the official said.

Two auto chief executives, Mary Barra of GM and Jim Farley of Ford Motor Co., are expected to attend, as is Brad Smith, the president and vice chairman of Microsoft Corp. Thasunda Brown Duckett, the CEO of TIAA, and Marc Benioff, the CEO of Salesforce.com Inc., are also planning to be at the meeting.

While the executives may not agree with every piece of the bill -- particularly its tax increases on corporations -- they still support it because they believe its benefits are worth the costs, the official said.

Biden’s push to sign the bill before the end of 2021 came to a halt last month when West Virginia Senator Joe Manchin pulled out of negotiations with the White House and Senate Democratic leadership.