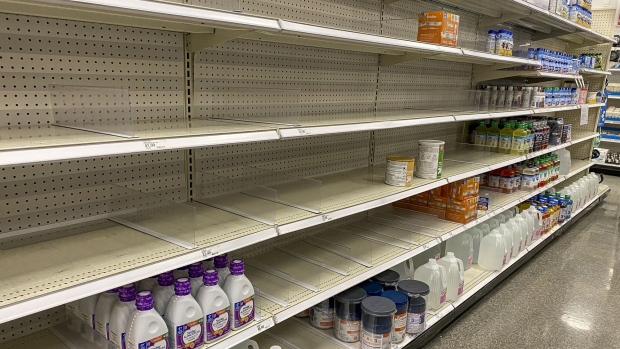 Empty shelves in the baby formula aisle of a store in Albany, California, US, on Tuesday, May 17, 2022. President Joe Biden said he expects increased imports of baby formula to relieve a US shortage “in a matter of weeks or less,” as pressure mounts from parents and lawmakers to address the problem. , Bloomberg

(Bloomberg) -- President Joe Biden on Wednesday invoked emergency powers under the Defense Production Act to boost production of baby formula and ordered government agencies to use commercial flights for imports to alleviate shortages.

The White House said in a statement that the move would allow domestic manufacturers to obtain needed ingredients and speed shipments of foreign supplies.

“I know parents all across the country are worried about finding enough infant formula to feed their babies. As a parent and as a grandparent, I know just how stressful that is,” Biden said in a video posted to Twitter.

“Today, I’m invoking what they call the Defense Production Act to ensure that manufacturers have the necessary ingredients to make safe, healthy infant formula here at home,” he said. “I’ve directed the Department of Defense and the Department of Health and Human Services to send aircraft, planes overseas to pick up infant formula that meets US health and safety standards so we can get it on the store shelves faster.”

The national baby formula shortage has emerged as the latest crisis for the White House, which is struggling to ease supply-chain bottlenecks and inflation sparked by pandemic distortions to the global economy. Biden is under pressure from both Republicans and Democrats in Congress to act quickly to ease the formula shortage, which has been months in the making.