The devil you know is better than the devil you don’t: Portfolio manager on Biden's next Fed chair

President Joe Biden preserved continuity at the Federal Reserve by selecting Jerome Powell for a second term as chair and elevating Lael Brainard to vice chair as the U.S. central bank grapples with the fastest inflation in three decades and the lingering effects of COVID-19.

The decision, announced by the White House on Monday, rewards Powell for helping rescue the U.S. economy from the pandemic and tasks him with protecting that recovery from a surge in consumer prices. A Republican, Powell will likely win a smooth confirmation in the Senate, although progressive Democrats may be disappointed by the choice.

Brainard would replace Richard Clarida in the vice chair slot and may face opposition from Senate Republicans for her confirmation given her tough line on bank regulation. She was interviewed by Biden for the chair position and was seen as a strong contender for the separate job of vice chair for supervision, which remains vacant.

Biden plans to announce a pick for that role along with additional nominations for open seats on the Board of Governors beginning in early December, the White House said.

“This provides a moment of certainty in an persistently uncertain world for the Federal Reserve,” said Diane Swonk, chief economist at Grant Thornton LLP. “Powell and Brainard are a powerful duo, who have shifted the Fed to focus more on inequality. Inflation foments inequality -- they get that.”

U.S. equities rose after the news, likely welcoming continuity at the Fed. Investors expect the central bank to raise interest rates from near zero in June, according to pricing in interest-rate futures markets.

Powell, 68, has enjoyed bipartisan support, including from Treasury Secretary Janet Yellen and other Democrats, although progressive Democrats such as Massachusetts Senator Elizabeth Warren lobbied Biden to choose someone more aligned with them on overseeing banks and battling climate change. Powell also had to answer for an ethics scandal after trading revelations by some senior Fed officials.

The President recently met with Warren at the White House to gather her input on this decision, and he and officials have been in regular and close consultation with Brown, according to a person familiar with the matter. Biden talked with both Brainard and Powell about his decision on Friday.

“Powell’s renomination means policy continuity, as he will shepherd the Fed and markets to policy normalization in the next four years. With inflation running surprisingly hot and hints of the labor-market recovery accelerating, we see an increased likelihood -- though still not our central scenario -- of the Fed announcing an acceleration of the taper pace at its December meeting.”

Biden, in a written statement, called the economic recovery so far a “testament to the economic agenda I’ve pursued and to the decisive action that the Federal Reserve has taken under Chair Powell and Dr. Brainard to help steer us through the worst downturn in modern American history and put us on the path to recovery.”

Biden added, “I’m confident that Chair Powell and Dr. Brainard’s focus on keeping inflation low, prices stable, and delivering full employment will make our economy stronger than ever before.”

He also singled out what he called their “deep belief that urgent action is needed to address the economic risks posed by climate change, and stay ahead of emerging risks in our financial system.” 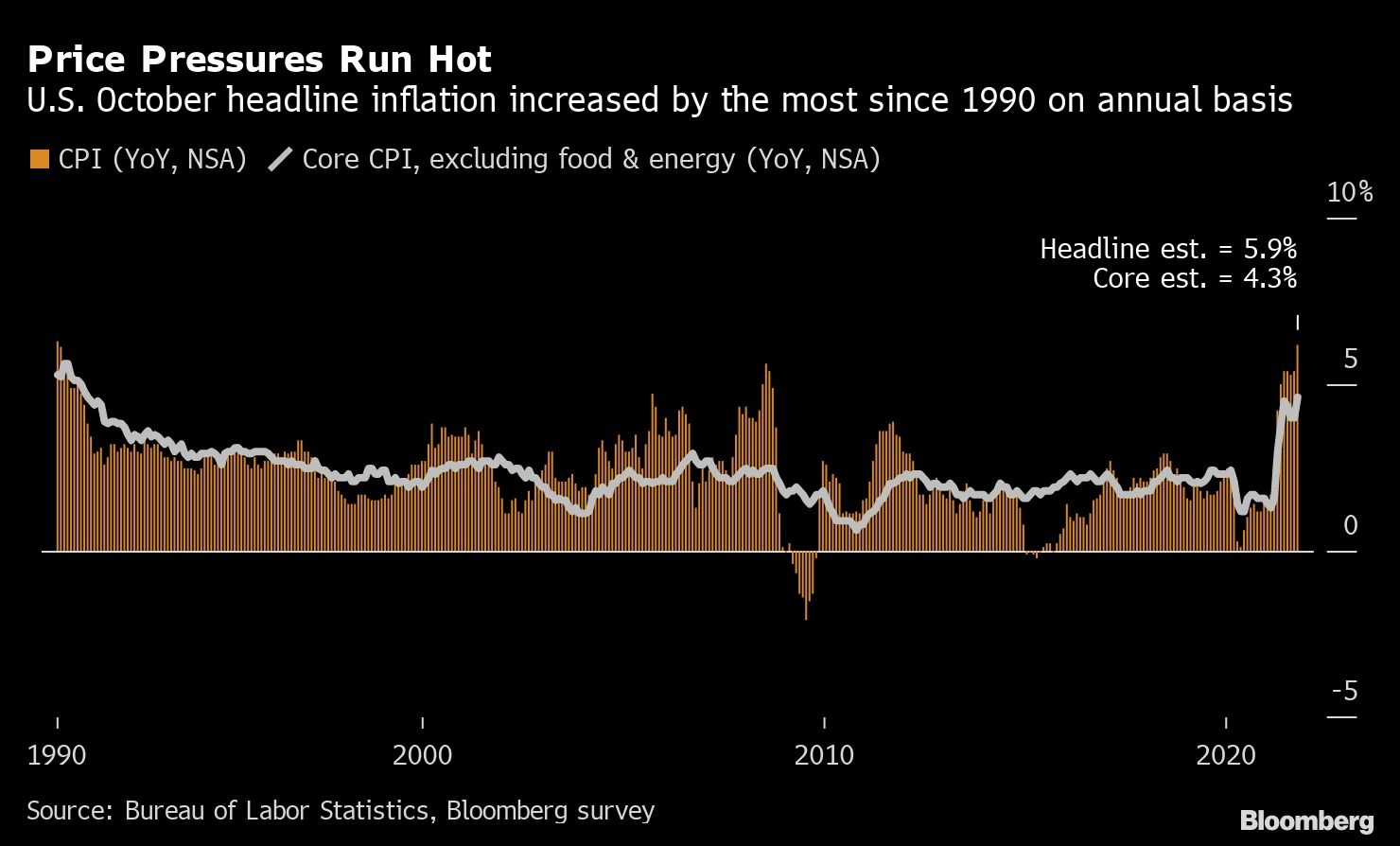 Powell, 68, was picked to run the Fed in 2017 by then-President Donald Trump and he secured Senate confirmation in an 84-13 vote. Trump later publicly turned on his choice for tightening monetary policy, prompting Powell to work hard to woo lawmakers to protect himself against the president’s Twitter attacks.

A former Fed Governor, Treasury official and private equity executive, Powell won plaudits for his aggressive response to the fallout from the coronavirus. As the economy plunged into recession, his Fed slashed rates to near zero in March 2020 and began buying a wide range of assets.

Brainard and Powell have similar views on monetary policy, but differ over bank regulation with Brainard opposing at nearly every step Powell’s modest rollbacks of some of the tough curbs imposed on banks after the financial crisis. Her support for the Fed to do more fighting climate change may also draw Republican opposition to her promotion.

If confirmed, she would likely have a bigger say at the Fed. Its vice chair is traditionally the central bank’s No. 2 official, playing a key role in supporting the chair and sending policy signals.

Brainard, 59, was appointed a Fed governor in 2014 by President Barack Obama. In 2020, Biden considered picking her as Treasury Secretary, before he chose Yellen.

A graduate of Harvard University, Brainard served in Bill Clinton’s White House as deputy national economic adviser. In 2009, under Obama, she joined the Treasury and became undersecretary for international affairs in 2010.

Powell’s second term is going to be very different from his first. While the economy is rebounding, inflation is running hot, COVID-19 cases remain elevated and strained supply chains present big uncertainties.

That poses a challenge to the Powell-led revamp of the Fed’s strategy, unveiled in 2020. It indicated the central bank would let the economy run faster than it did historically, in the hope that would boost and broaden employment and wages. Part of the thinking was that should particularly benefit marginalized workers and minorities.

But the surge in prices has led to criticism from some quarters that the Fed is behind the curve in tightening policy and that its new framework has already passed its sell-by date.

Powell said for most of this year that the inflation pressures would prove “transitory” and the Fed wouldn’t consider hiking rates until the labor market shows greater signs of healing. But he also noted this month he “will not hesitate” to act if inflation became unanchored, signaling the Fed isn’t tone-deaf to the anxiety that higher prices are causing ordinary Americans.

Some officials are already suggesting the Fed may need to pull back its massive asset-purchase program faster than now planned and Powell will also be presiding over a committee with a number of members who likely want to raise rates sooner than he does.