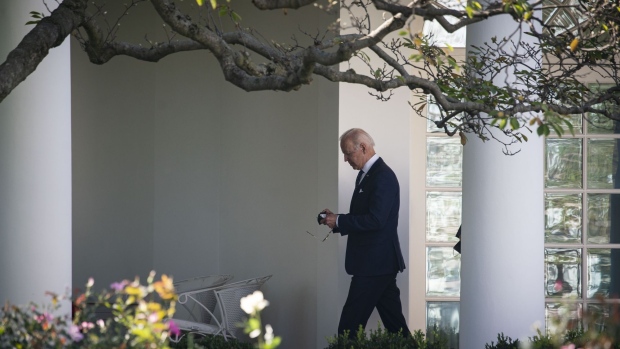 U.S. President Joe Biden walks past the Rose Garden to the Oval Office after speaking during the Council of Chief State School Officers' 2020 and 2021 State and National Teachers of the Year event at the White House in Washington, D.C., U.S., on Monday, Oct. 18, 2021. About one hundred teachers will be honored for their excellence in teaching and commitment to students' learning. Photographer: Al Drago/Bloomberg , Bloomberg

The high-level meeting comes as Democrats strive to wrap up negotiations on roughly $2 trillion compromise version of Biden’s spending plan by the end of this weekend. Pelosi had breakfast with the president, with Schumer participating virtually, according to people familiar with the meeting.

“We had a very positive meeting this morning. I’m very optimistic,” Pelosi told reporters at the Capitol afterward. “Much of the bill has been written, we just need some decisions.”

A deal on the social-spending package could allow the House to vote on a separate $550 billion bipartisan infrastructure bill that has been held up by progressive lawmakers who first want the agreement on the larger bill. Leaders have said they hope to vote on the infrastructure bill before the Oct. 31 expiration of current highway funding.

Schumer earlier this week said he wanted to strike an agreement on a framework for Biden’s plans by Friday, but numerous disagreements on both revenue and spending remained. Democrats said they planned to continue negotiating through the weekend.

Getting a resolution this weekend will be a heavy lift. There’s not yet agreement on the top line for spending or on a range of revenue-raising measures to pay for it. Opposition by Arizona Senator Kyrsten Sinema to raising the corporate and individual tax rates has forced Democrats to scramble to search for alternatives.

“I don’t think we’re going to be able to get the vote,” Biden said in response to a question about individual and corporate rates at a CNN town hall on Thursday in Baltimore.

The White House has been directly negotiating with Sinema to find ways to raise revenue to come up with enough money to fund the climate, health care and early childhood programs central to Biden’s economic agenda.

Sinema has agreed to raise tax revenue from companies and the wealthy, according to a person familiar with the matter. But that’s posed a challenge to craft potential alternatives to rate increases.

How to raise revenue isn’t the only obstacle. Democratic Senator Joe Manchin of West Virginia, who supports increasing tax rates for corporations and high-income individuals, has said he can’t support a clean power program favored by Biden. There are still a host of other provisions that also remain unsettled.

Pelosi said committees were working on the tax portion and that there were “a couple of outstanding issues” on health care.

(Updates with Pelosi remarks in third and last paragraphs)