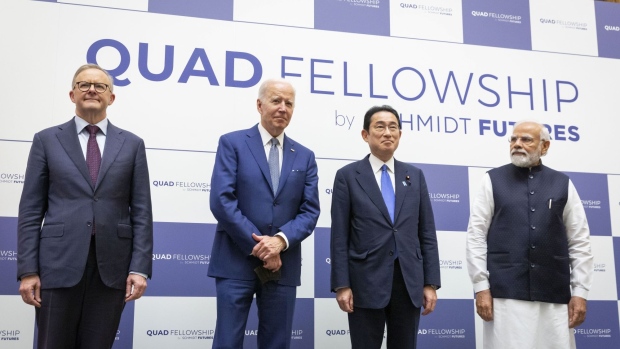 (Bloomberg) -- President Joe Biden and Indian Prime Minister Narendra Modi discussed efforts to combat the rise in energy and food prices caused by Russia’s invasion of Ukraine, according to the White House.

In a statement following the leaders’ bilateral meeting in Tokyo on Tuesday, the White House said Biden “condemned Russia’s unjustifiable war against Ukraine,” notably not saying whether Modi did the same.

India has come under criticism for refusing to isolate Russian President Vladimir Putin by continuing to buy Russian oil at a discounted price and because Modi has never outright condemned Russia’s aggression.

“The leaders’ committed to continue providing humanitarian assistance, and discussed how to cooperate to manage disruptions caused by the war in Ukraine, in particular the rise in energy and food prices, to protect their respective citizens and the world,” the White House said.

The two leaders met for roughly 30 minutes on the sidelines of the Quad, an alliance with Japan and Australia. They last spoke in April.

US officials for months have issued blanket warnings to any country that would aid Russia in its war in Ukraine. But the White House has refrained from calling out India specifically -- and did so again Tuesday.

India’s export ban on wheat has also contributed to rising food prices and exacerbated a global food shortage caused by the war in Ukraine.

The White House said repeatedly it was not in India’s interest to continue its dependence on Russian oil but also stressed that the US does not view other countries’ purchases of the commodity as a violation of US sanctions.

The leaders on Tuesday discussed ways “to accelerate India’s just energy transition,” according to the White House.