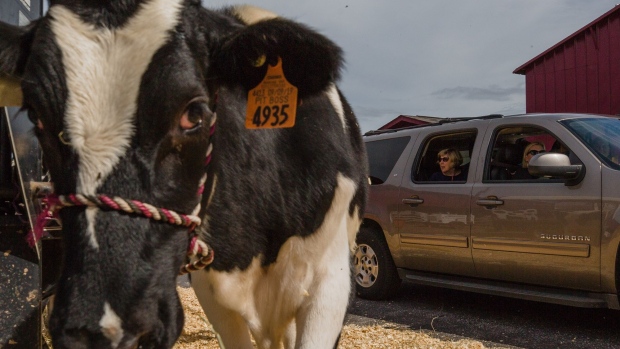 Attendees to the South Carolina State Fair pass a cow in the drive-thru livestock section in Columbia, South Carolina, U.S., on Tuesday, Oct. 20, 2020. At least 157,394 people have tested positive for the coronavirus in South Carolina, and 3,439 have died, according to state health officials, The State reports. Photographer: Micah Green/Bloomberg , Bloomberg

(Bloomberg) -- The Biden administration announced Friday it will strengthen U.S. regulatory protections for livestock and poultry producers in their dealings with meatpackers after Covid outbreaks and a cyber attack on JBS SA highlighted domination of the industry by a few giant companies.

“The pandemic and other recent events have revealed how concentration can take a painful toll on independent farmers and ranchers, while exposing working family consumers to higher prices and uncertain output,” Agriculture Secretary Tom Vilsack said in a statement Friday. “The process we’re beginning today will seek to strengthen the fairness and resiliency of livestock markets.”

Joe Maxwell, president of Family Farm Action Alliance, an advocacy group, said he was “very encouraged” by the announcement.

Ranchers and cattle feeders have complained that prices meatpacking companies pay for cattle have barely budged even as the cost of beef at the grocery store has been soaring, repeating a pattern last year when Covid outbreaks closed or slowed some processing facilities.

The cyber attack on JBS late last month further underscored concentration of the industry as it briefly shut down nearly one-quarter of U.S. beef-processing capacity. The political ramifications of the attack continue, with the U.S. House Oversight Committee asking JBS for documents on its handling of the incident and decision to pay an $11 million ransom to regain control of its computer systems.

Four giant companies control more than 80% of U.S. beef processing, and pork and chicken processing also are dominated by only a few companies. The U.S. Justice Department has heightened scrutiny, launching an antitrust investigation last year of the four major beef processors and charging two chicken producers with price-fixing in a criminal investigation of the poultry industry.

Cattle producers were seething even before the JBS disruption, increasing political pressure on rural lawmakers for action to level the playing field in livestock markets.

The Biden White House’s Office of Management and Budget announced Friday that the administration plans to propose new regulations under the Packers and Stockyards Act, a 1921 law Congress passed to protect farmers and ranchers from unfair trade practices. That will include reopening consideration of stronger protections that the Obama administration proposed in 2016, which were scuttled under Donald Trump and replaced by less aggressive rules.

“The problem with the tournament system is that the poultry processor holds all the controls over production but wants to build a payment system that has the appearance of rewarding better producers,” Maxwell said. “The system doesn’t allow any producer the control to make the necessary decisions on their farm.”

The administration also said USDA would propose new regulations to allow voluntary labeling of meat with “Product of the USA” and similar statements, a goal of U.S. livestock producers.