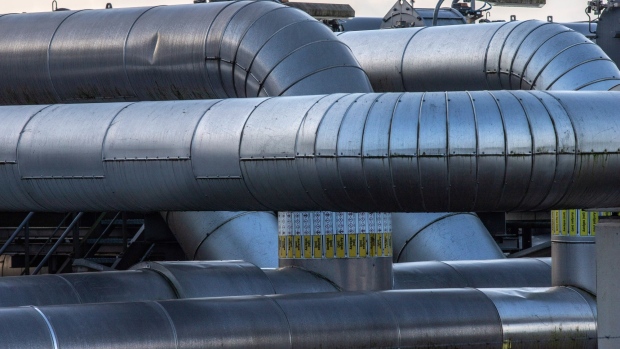 Pipework at a natural gas condensate storage and distribution site in Norg, Netherlands, on Wednesday, Nov. 17, 2021. European gas surged to the highest level in a month, fueling wider inflation concerns, as delays to a controversial new pipeline from Russia stoked fears of a supply shortage this winter. Photographer: Peter Boer/Bloomberg , Bloomberg

(Bloomberg) -- Biden administration officials have been talking with Qatar about possibly supplying Europe with liquefied natural gas if a Russian invasion of Ukraine leads to shortages, according to people familiar with the matter.

President Joe Biden plans to ask the Persian Gulf nation’s emir, Sheikh Tamim bin Hamad Al Thani, to visit the White House, possibly as soon as later this month, two of the people said on Friday. The meeting between Biden and the emir has been in the works for some time, a White House official said Friday night.

Some European nations have expressed fears that punishing Russia with harsh sanctions over the Ukraine crisis could wind up damaging their economies and prompt Russian President Vladimir Putin to cut off or scale back gas supplies in the middle of the winter.

Europe gets more than 40% of its natural gas from Russia, and about a third of Russian gas flowing to Europe passes through Ukraine.

Qatar is one the world’s biggest producer of LNG, with about three-quarters of the fuel sold to energy-poor Asian countries such as Japan and Korea. Qatar provides about 5% of Europe’s natural gas.

The Qatari embassy in Washington did not immediately respond to a request for comment.

In Europe, shifting to LNG is critical for countries such as Lithuania and Poland that are looking to escape the pipeline politics involved in buying gas from Russia.

U.S. officials want to help ease Europeans’ concerns about how they’ll heat their homes this winter, according to people familiar with the private discussions, who spoke on condition of anonymity.

The U.S. has been stepping up pressure on the Europeans to agree on a package of sanctions, showing signs of frustration at the pace of negotiations with and within the European Union despite weeks of talks.

Putin has denied that he plans to invade, but is demanding concessions and security guarantees from NATO that the military alliance says it cannot provide.

Europe’s stockpiles of natural gas are low as the continent grapples with a supply crunch. Moscow’s increased leverage over its neighbors became apparent last winter, an unusually cold and long one, that depleted Europe’s inventories of gas just as its economies were emerging from the pandemic-induced recession. Over the summer, Russian state-controlled Gazprom PJSC began capping flows to the continent, aggravating shortages.

White House National Economic Council Director Brian Deese has said the administration is working with partners to step up fuel supplies to Europe.

“In the very immediate term, the focus is on how we can make sure that European countries have sufficient access to natural gas to get through the winter months, but also to alleviate pressures in the spring,” Deese said Thursday in an interview with Bloomberg Television. “And very specifically, what that means is working with our allies and partners, particularly gas producing countries to understand what additional capacity exists and how we could move and extend that capacity into the region.”

The administration has been holding talks with other countries about providing gas to Europe, the people said.