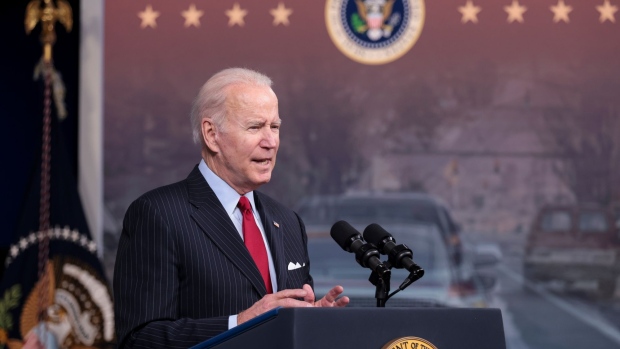 U.S. President Joe Biden speaks on the economy in the Eisenhower Executive Office Building in Washington, D.C., U.S., on Tuesday, Nov. 23, 2021. The U.S. will release 50 million barrels of crude from its strategic reserves in concert with China, Japan, India, South Korea and the U.K., an unprecedented, coordinated attempt by the world's largest oil consumers to tame prices that risks a backlash by OPEC+. , Bloomberg

(Bloomberg) -- The Biden administration is set to outline major changes to the U.S. government sale of drilling rights on federal lands and waters, with an overhaul it calls necessary to address climate change, people familiar with the matter said.

The blueprint to be issued by the Interior Department on Friday is designed to help reshape the federal oil and gas leasing program so it better accounts for the climate change consequences of using the fossil fuels extracted from public land. The plans were described by people familiar with the matter who asked not to be named because the report isn’t yet public.

The report is the culmination of a “comprehensive review and reconsideration of federal oil and gas permitting and leasing practices” that President Joe Biden ordered in January.

The Interior Department could make some changes on its own through regulations or simply in the terms it sets for future sales, such as boosting the royalty rates that energy companies pay for the oil and gas they extract. Other policies would require action by Congress.

If fully enacted, changes under consideration could winnow the land available for oil and gas development while raising the costs of that activity even where new leases are sold.

The assessment will be delivered against the backdrop of higher gasoline prices that have provoked concern at the White House and spurred calls for the Biden administration to go in the opposite direction, accelerating domestic oil and gas production. After OPEC+ nations rebuffed the administration’s call to ramp up oil production, Biden on Tuesday moved to release 50 million barrels of crude from the U.S. emergency stockpiles.