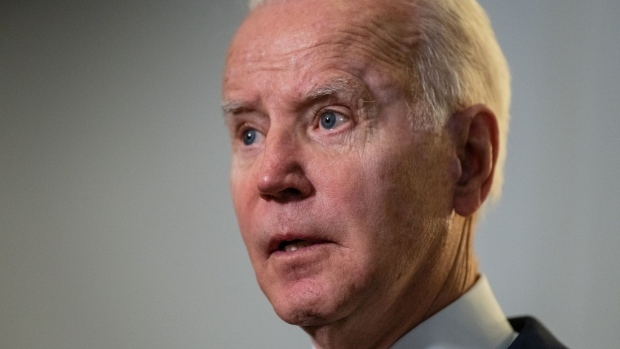 U.S. President Joe Biden speaks after exiting a meeting with the Senate Democratic Caucus in Washington, D.C., U.S., on Thursday, Jan. 13, 2022. Biden said he still hopes to win passage of voting rights legislation, which is headed to almost certain defeat, and that he'll continue trying if lawmakers vote it down. , Bloomberg

(Bloomberg) -- President Joe Biden will hold a news conference on Wednesday to mark the end of his first year in office, facing reporters as his agenda has stalled and Covid-19 cases are spiking.

The question-and-answer session, set for 4 p.m. New York time, will be just his second formal solo press conference at the White House since taking office. He frequently answers reporters’ shouted questions at events or while he’s traveling, but has limited his structured interactions with journalists.

The president’s approval rating hit a new low of 33% in a Quinnipiac University poll released Wednesday, while 53% of Americans surveyed said they disapproved of his job performance. His approval rating has been around 40% in other recent polls, well below the peaks around 55% he experienced in the earliest months of his presidency.