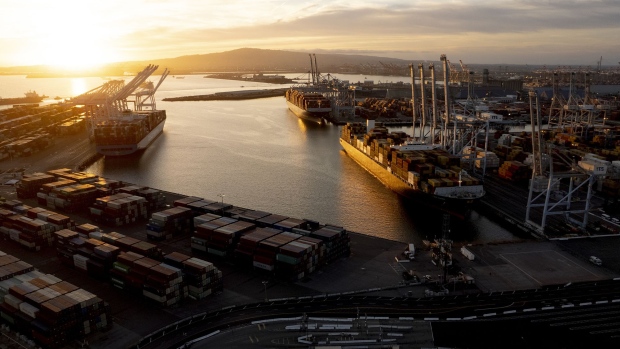 The Emerging Projects Agreement is the first time the federal government has teamed with a state to develop and fund a range of supply-chain projects at once, rather than taking a piecemeal approach to specific initiatives, Port Envoy John Porcari told reporters Thursday. The accord will make available two federal loan programs to projects including upgrading highways and ports, developing inland warehouse facilities and expanding freight-rail capacity.

The Biden administration and California officials are under pressure to relieve a logjam in the nation’s supply arteries, but especially at the ports of Los Angeles and Long Beach. More than 70 container vessels are anchored off the coast of the two maritime hubs, unable to dock at terminals because of an excess of containers already stored there.

While praising the new partnership, Porcari and Kim didn’t mention specific projects already targeted or any timeline for completion.

Regarding how the partnership would operate, the federal government will task the Transportation Department’s Build America Bureau to coordinate with California officials on proposed projects, Porcari said.

The Biden administration would allocate to the state some lending capacity from the Railroad Rehabilitation and Improvement Financing program and the Transportation Infrastructure Finance and Innovation Act, two loan initiatives with low interest rates and other advantageous terms.