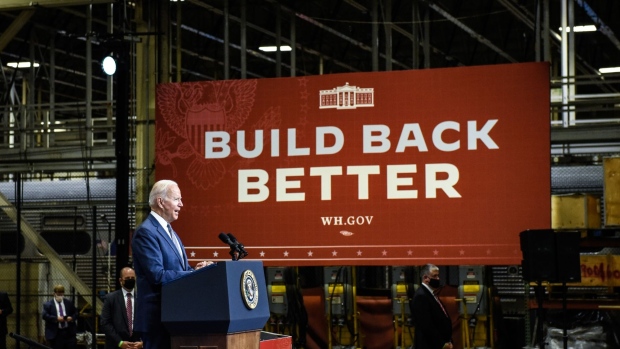 Senator Joe Manchin, a Democrat from West Virginia, speaks to members of the media following a meeting with Senator Kyrsten Sinema, a Democrat from Arizona, left, at the U.S. Capitol in Washington, D.C., U.S., on Wednesday, Oct. 27, 2021. Senate Democrats released the details of a proposed levy on billionaires, a new and logistically risky approach to taxation that lawmakers hope will help fund the White House's social spending aimed at low and middle-income Americans. , Bloomberg

(Bloomberg) -- While the White House scrambles for a deal with Congress on its economic agenda, President Joe Biden and top aides have put almost as much time into preparing progressives to get far less than they wanted from his tax-and-spending plan.

The message from the president, Vice President Kamala Harris and top aides to groups like the Congressional Black Caucus and Women’s Caucus and key individual lawmakers such as Senator Bernie Sanders has been: a lesser bill is better than no bill at all.

While details of the legislation are changing by the hour, many provisions dear to liberals have already been pared back or eliminated, among them a clean electricity plan, free community college and higher tax rates for the wealthy and corporations.

The task of White House officials now is to sell fractious Democratic lawmakers and voters on the idea that even a smaller, more modest package of social welfare improvements can still be powerful and in-line with the president’s campaign promises to help seniors, women, minorities and children.

Democratic strategists regard Biden’s two signature economic bills, the Senate-passed $550 billion infrastructure plan and the larger “Build Back Better” climate and social-spending legislation, as key to any success for their party in midterm elections and beyond.

Progressives are not pleased some priorities they share with Biden were tossed out to satisfy moderates.

“It sucks, and I’m pissed off that one senator, two senators are deciding what happens with the whole country,” he said.

That meeting followed one earlier with a number of House Democrats who are members of its minority and women’s caucuses. Some of those lawmakers emerged from the White House clutching bags filled with presidential-souvenir M&Ms, Hershey’s Kisses and other treats.

“The president talked about how transformational this bill will be and that even though we may not have everything we want in the bill, that this will lay the groundwork for so much relief for working families in America,” said Representative Judy Chu of California, chair of the Congressional Asian Pacific American Caucus.

As of Wednesday afternoon, the Build Back Better plan still appeared to include money to expand public preschool across the country and federal support for child and elderly care, tax credits to make renewable energy more affordable and an expansion of the Affordable Care Act -- all progressive priorities. But paid family leave was at risk of being cut from the bill entirely.

But Biden can afford to lose no more than three Democratic votes in the narrowly divided House, if all Republicans oppose the legislation as expected.

“If we go down to zero paid family leave, that’s not OK. That’s unjust to the people,” said Representative Cori Bush, a Missouri Democrat.

Biden originally proposed 12 weeks of paid leave, but said last week it had been reduced to four in negotiations with Manchin and Sinema. Bush called that “really sad” but added, “I can’t say that it’s a red line. I can’t speak for everyone, but I know for me, we need to have paid family leave and four weeks was not enough.”

Meanwhile, the elimination of tax rate increases for the wealthy and corporations forced Democrats to consider a more unorthodox source of revenue for the programs that remain, a new “billionaire’s tax” outlined by Senate Finance Chairman Ron Wyden on Wednesday.

Sanders complained to reporters that “almost every sensible progressive revenue option that the president wants, the American people, that I want seem to be sabotaged.”

White House Press Secretary Jen Psaki said the president supports many of the progressive proposals, such as paid leave, but that he ultimately had to reach an agreement acceptable to congressional leaders, House members and all 50 Democratic senators, including Sinema and Manchin.

“What we’re looking at here is an historic package that will make changes to our childcare system, lower the cost of elder care,” Psaki said. “We know it’s not going to have everything we want.”

The White House has promised to continue to fight for any liberal priorities that end up cut from the bill, either by trying to include them in future legislation or by accomplishing something similar through executive action. Administration officials have told climate activists to expect a rule on methane soon, as a fee on methane emissions looks likely to be cut from Build Back Better, according to two people in frequent touch with the White House.

“This will lay the groundwork for so much relief,” Representative Hakeem Jeffries said on Tuesday at the White House.  “Whatever is not in the bill, he pledged to continue working on that for the rest of his term.”

And though the clean electricity program and methane fee appear unlikely to end up in the final package, the bill’s climate policies include many incentives to urge Americans to turn to renewable energy like solar and wind, though without penalties for polluting fuels. One climate leader who asked not to be identified detailing discussions with the White House called it an all-carrots, no-stick approach.

The White House’s message this week to Democratic lawmakers, protesters and outside groups is to take the win ahead of the mid-terms, even if it is not as ambitious as many of the ideas Biden discussed during the campaign or his first six months in office.