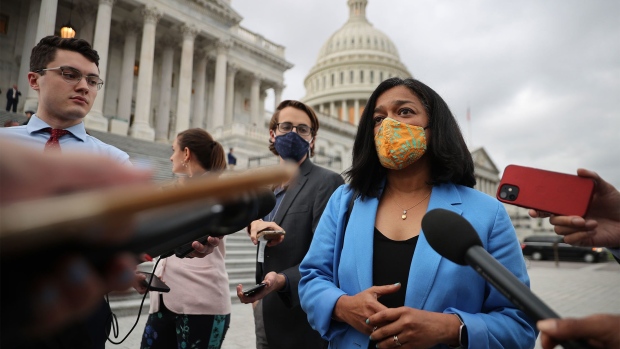 (Bloomberg) -- President Joe Biden met with the leader of the Congressional Progressive Caucus on Monday as lawmakers returned to Washington for make-or-break negotiations over the president’s infrastructure and social spending proposals.

The president met Monday morning with Representative Pramila Jayapal, a Washington state Democrat, at the White House, according to a White House official. Biden is expected to hold other conversations by phone with Democrats across the ideological spectrum, according to the official who asked not to be identified discussing the president’s private schedule.

Biden has no public events listed on his official schedule for the day. CBS News reported the Jayapal meeting earlier Monday.

But the legislation has so far struggled on Capitol Hill, with two moderate Democratic senators -- West Virginia’s Joe Manchin and Arizona’s Kyrsten Sinema -- demanding the programs be scaled back in cost and scope.

Progressive members, including Jayapal, have blocked the House from moving forward on a Senate-passed bipartisan infrastructure bill until a deal on the separate spending and tax legislation is reached.

Biden told reporters on Friday he was “pushing hard to try to get it moving as quickly as I can” but said there was not a deadline for concluding the talks. House Democrats have indicated they hope to have a framework agreement in place by the end of the month, when funding for federal transportation programs expires.