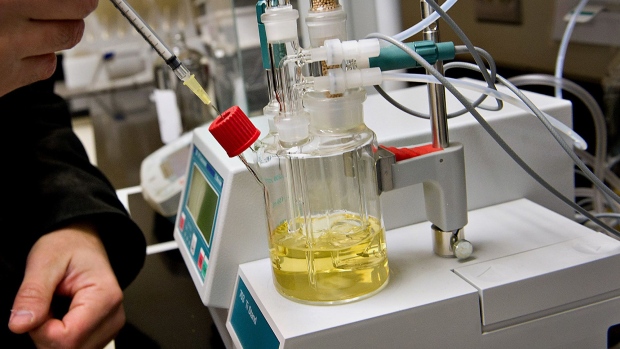 A lab and quality manager at an ethanol plant performs a quality test on a batch of ethanol in the plant's lab in Underwood, North Dakota. , Photographer: Daniel Acker/Bloomberg

(Bloomberg) -- The Biden administration is opening the door to a sweeping rewrite of the 17-year-old US biofuel mandate, including a plan to encourage use of renewable natural gas to power electric vehicles, which could benefit Tesla Inc. and other automakers.

An Environmental Protection Agency proposal released Thursday invites public feedback on an array of changes to the Renewable Fuel Standard, initially designed in 2005 to push more ethanol, biodiesel and other plant-based alternatives into vehicles. The plan may spur an overhaul that could shift the program from one narrowly focused on gasoline, diesel and other liquid fuels to an initiative broadly aimed at decarbonizing transportation.

The EPA will also seek public feedback on the best way to promote next-generation low-carbon biofuels, while protecting American oil refining assets after a wave of pandemic-spurred closures and the Russian invasion of Ukraine underscored the strategic importance of these facilities.

The measure “will set the stage for further growth and development of low-carbon biofuels in the coming years,” the EPA says in its proposal. During the transition, “maintaining stable fuel supplies and refining assets will continue to be important to achieving our nation’s energy and economic goals as well as providing consistent investments in a skilled and growing workforce.”

The agency is proposing to raise the amount of biofuel that must be mixed into gasoline and diesel over the next three years to as much as 22.68 billion gallons in 2025, up from this year’s 20.87 billion gallons. Under the measure, conventional ethanol may be used to fulfill as much as 15.25 billion gallons. But that exceeds what oil refiners call the “blend wall,” or the 10% ceiling on the amount that can be blended into the most commonly available E10 gasoline.

The EPA is asking the public for feedback on whether it should actually set the conventional renewable fuel requirement below the blend wall. It also wants public comment on how the quota plan will affect the “continued viability of domestic oil refining assets,” including so-called merchant refiners with limited blending facilities that can’t easily generate compliance credits.

Administration officials took pains to emphasize their desire to protect oil refining capacity while fostering alternative fuels.  EPA Administrator Michael S. Regan said the agency was “focused on strengthening the economics of our critical energy infrastructure” even as it seeks to diversify the nation’s fuel mix. And Energy Secretary Jennifer Granholm cast the proposal as a way to “drive forward fuel innovations while balancing the need to maintain and strengthen critical domestic refining capacity, and support the union workers who operate these facilities.”

Nevertheless, the measure drew criticism from some oil refining supporters as well as biodiesel advocates.

Soybean and corn futures fell in Chicago, with soy oil sliding as much as 6.3%, the biggest decline since early July.

Crop trading giants Archer-Daniels-Midland Co. and Bunge Ltd., both of which have expanded their presence in the market for climate-friendly diesel, saw steep declines on Thursday. Bunge shares dropped as much as 7.7%, their biggest intraday pullback since March 29, while ADM fell as much as 6.4%, the most since September.

Shares of ethanol producers such as Green Plains Inc. swung between gains and losses.

The proposal was also a blow to oil refining champions, who said it would increase the industry’s compliance costs, undermining the economics of some operations. Senator Chris Coons, a Democrat from Delaware, called the proposed quotas “unachievable” and said they foster uncertainty for skilled union workers.

“The cost of complying with the Renewable Fuel Standard is at a record high because the volumes don’t align with what our country can actually produce and consume,” Coons added in an emailed statement.

Refiners prove they have fulfilled annual blending quotas by relinquishing tradeable credits known as “renewable identification numbers” or RINs, which are generated with each gallon of biofuel.

Under a court settlement, the EPA is obligated to finalize the biofuel quotas by June 14 next year. A senior administration official said public feedback could determine the shape of the final rule, prompting the EPA to revise initially proposed blending requirements or even revisit past policy decisions tied to RIN holding thresholds, disclosure requirements and market liquidity.

The EPA would also create an eRIN credit awarded when electricity from certain renewable sources -- such as natural gas harvested from landfills and at farms -- is used as fuel to power EVs. Under the proposal, automakers alone could generate the credit, though its value could be shared with other parties, such as the generators of biogas-powered electricity.

As designed, the eRIN plan would add another incentive for automakers such as Ford Motor Co. and General Motors Co. to produce electric vehicles, building on tax support in the just-enacted Inflation Reduction Act and other air pollution policies.

The plan is likely to set off furious lobbying as charging station operators, biogas producers and utilities vie for a piece of the eRIN credit. Even before the EPA released its proposal, the eRIN concept was opposed by some environmentalists and congressional Democrats who say it would subsidize large industrial livestock operations.

Biodiesel producers also took aim at the proposed quotas, which would offer only a modest boost over the current 2.76-billion-gallon requirement, despite a predicted surge in demand and new production capacity next year. The plan “significantly undercounts existing biomass-based diesel production and fails to provide growth for investments the industry has already made in additional capacity, including for sustainable aviation fuel,” said Kurt Kovarik, vice president of federal affairs at the Clean Fuels trade group.

(Updates with further details on EPA proposal starting in second paragraph and prices.)