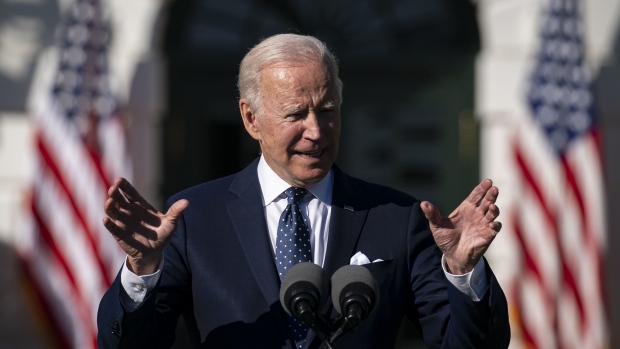 U.S. President Joe Biden speaks during the Council of Chief State School Officers' 2020 and 2021 State and National Teachers of the Year event on the South Lawn of the White House in Washington, D.C., U.S., on Monday, Oct. 18, 2021. About one hundred teachers will be honored for their excellence in teaching and commitment to students' learning. , Bloomberg

(Bloomberg) -- President Joe Biden and top congressional leaders are pushing again this week to reach compromise on the president’s economic agenda, and will hold back-to-back meetings with feuding liberals and moderates at the White House on Tuesday.

Then at 4:30 p.m., Biden, Harris and Yellen will meet with eight centrist Democrats, including Senators Jon Tester of Montana and Mark Warner of Virginia.

The goal is for the factions to settle on a list of policies to include in the legislation that can appeal to the broadest swath of the party -- including two key moderate holdouts, Senators Joe Manchin and Kyrsten Sinema, and progressives such as Senator Bernie Sanders.

Biden has been talking separately with Manchin and Sinema, who are pressing him to significantly pare down the bill. Manchin and Sanders met Monday evening at the Capitol after an op-ed Sanders published Oct. 15 in the Charleston Gazette drew a fiery rebuke from the West Virginia senator.

“I recognize that there is a lot of frustration out there. I’m not aware of any more reason for optimism than last week,” Maryland Democratic Senator Ben Cardin said Monday.

“I do think we are at a pivotal moment, and this is an important week,” he added. “People are negotiating in good faith. so that gives me some hope.”

Negotiations have dragged on for week, threatening both pieces of Biden’s economic agenda -- the $550 billion Senate-passed bipartisan infrastructure plan and a larger package of tax increases and spending to curb climate change and expand federal support for social programs including education, childcare and healthcare.

Democratic operatives say that the longer the talks continue, the more opportunity Republicans and allied interest groups will gain to organize opposition to the legislation. Many Democrats believe both bills are crucial for the party’s prospects in the 2022 mid-terms, let alone the success of Biden’s presidency.

Warner said Monday that he thinks a deal is closer, “but boy, it’s taking a while.”

With an eye on the Nov. 2 Virginia governor’s election, Warner has advocated for Congress to clear the infrastructure bill for Biden to sign as negotiations continue on the social-spending bill. But House progressives say they won’t support the infrastructure legislation unless a deal is sealed with Manchin and Sinema on the larger bill, which would carry many of their priorities into law.

Congressional Democrats have narrowed some of their differences on a top-line price tag for the tax and spending package, but that progress belies deep disagreements on specific policy and funding provisions, particularly climate programs, a proposed Medicare expansion, paid family and medical leave and the child tax credit.

Manchin, who represents a coal-producing state and personally earns income from shares of a coal brokerage he founded, opposes a clean electricity program in the legislation. He’s also called for income restrictions and work requirements for the child tax credit, one of Biden’s top priorities.

An additional complicating factor is that Sinema, an Arizona Democrat whose support is critical for Democrats to advance the bill, hasn’t publicly outlined her key demands for the legislation. Many House Democrats have complained that they don’t know what she wants or what she’ll support.

Congressional leaders have set an Oct. 31 deadline for votes on the two bills, but Manchin said Monday that “I don’t know how that would happen.”

After meeting with Manchin on Monday, Sanders said the American people want Congress to act.

“There is a general feeling that negotiations have been going on month after month after month and that it is time that we brought this thing to a head as soon as we possibly can,” he said. “I would hope that we would see some real action this week.”