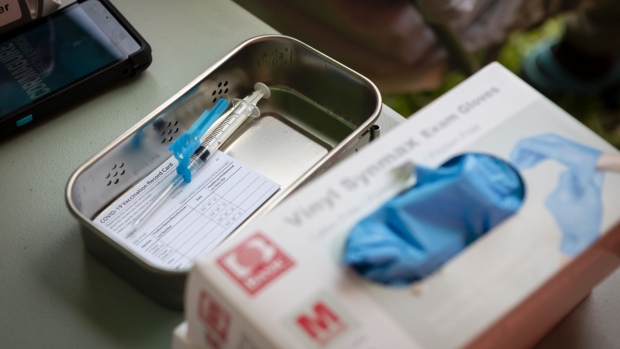 A tray with a dose of the Johnson & Johnson Covid-19 vaccine on a table during a Miami-Dade County Homeless Trust mobile vaccination outreach event in Miami. , Bloomberg

(Bloomberg) -- As the Biden administration moved Wednesday to make Covid-19 booster shots available for many U.S. adults, health-care providers are preparing for a fresh pandemic battle: getting uncertain or confused patients to take another dose.

While the idea of a follow-up vaccine is well-established -- the flu shot is taken yearly, for instance, and the tetanus vaccine also requires a booster -- federal officials’ latest move represents a major change in tone. Health agencies said as recently as July 8th that fully vaccinated Americans “do not need a booster shot at this time.” Now, health officials recommend that those who received Pfizer Inc. or Moderna Inc. shots get a third round about eight months after their second, beginning in September.

Anthony Fauci, President Biden’s chief medical adviser, said Wednesday that offering boosters is a step “to stay ahead of the virus.” Public health experts say that guidance can and should change as the pandemic evolves, but they acknowledge that abrupt shifts can also undermine trust in authorities and even the vaccines themselves.

Josh Michaud, associate director for global health policy at the Kaiser Family Foundation, said he expects there will be a drop-off in uptake with third shots. “There is this spectrum of enthusiasm, and people’s reasons for getting vaccinated or not can be complex and change over time,” Michaud said.

At Grants Pass Clinic in southwestern Oregon, in a county where only 44% of people are vaccinated, one provider has fielded about forty calls about boosters.

Some callers “just want to get the third dose because they’re scared,” while others think they might qualify but don’t, said Christi Siedlecki, the clinic’s chief executive officer. Boosters are currently available only to some immunocompromised people, so those not in that group are being turned away for now.

Others in the community aren’t so eager. “I have definitely had the concern that there will be people who won’t want to come in for a third vaccine,” in part because of side effects, Siedlecki said. “And if that’s what we’re seeing, we’re going to have to improve our messaging.”

The Biden administration plan puts health-care providers, nursing home residents and other seniors in line to be early recipients. The U.S. Food and Drug Administration and the Centers for Disease Control and Prevention’s Advisory Committee on Immunization Practices will also weigh in. Those who got the Johnson & Johnson vaccine, which became available more recently, will likely need boosters, too, health officials said.

The shift in policy was based on studies that showed the effectiveness of Covid-19 vaccines against infection declined over time, including in highly vulnerable populations like those in nursing homes, CDC Director Rochelle Walensky said at a Wednesday morning briefing. The shots continue to work well to prevent hospitalization, she said.

“I want to emphasize that this decision was not made lightly,” said Vivek Murthy, the U.S. surgeon general. It also “does not change our commitment to vaccinating those who are not yet vaccinated, here in the U.S. and around the world.”

The topic of vaccinations has become highly politicized. Misinformation about the shots abounds, contributing to nearly 30% of the adult population in the U.S. remaining unvaccinated. The arrival of boosters raises new questions about deepening inequities as many countries across the globe still lack access to first doses.

With the expansion of booster shots to a wider group of people, “the amount of vaccines you’re pulling out of the pool that could go elsewhere goes from basically zero for immunocompromised folks to a number that gets potentially very big,” said Govind Persad, an assistant professor at the University of Denver Sturm College of Law. “The slower you go, the less severe the drain on global resources.”

To make matters more complicated, some vaccine recipients don’t even complete the two-dose regimen. Data from a March CDC report show that the vast majority of people got both doses on schedule, but around 420,000 people, or 3.4%, had missed their second dose. The agency said in April that figure had grown to nearly 8%.

Polls have found varying levels of support for getting a third shot. A survey conducted by Yahoo News and YouGov last month found just over 60% of vaccinated people would get another dose, while the remainder were split between being unsure and declining to do so. An Axios/Ipsos poll done in mid-July found that 87% of vaccinated Americans would get a booster upon public health officials’ guidance. The polls preceded the new government recommendation.

Many people want protection from the virus, said Joe Moose, a pharmacist who owns Moose Pharmacy, which has seven locations outside of Charlotte, North Carolina. But, he added, “we’re still battling with that person who’s vaccine hesitant,” he said, and the need for a booster “to some of them is more evidence the vaccine really isn’t effective.”

The government’s Wednesday move followed a recommendation the CDC issued last week that those who are moderately to severely immunocompromised, such as patients being treated for cancer, should receive an additional shot.

Soon after that announcement, Elle Moxley walked into a CVS store in Kansas City, Missouri, and got a third shot. Moxley, who is 33 and works for a school district, has Crohn’s disease, for which she takes immuno-suppressing medication.

“We knew that my protection was still kind of a question mark,” Moxley said. “I said all along, as soon as a booster’s available, I’ll roll up my sleeve.”