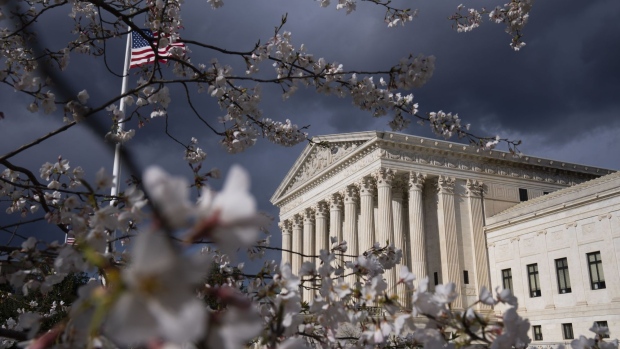 Cherry blossoms near the U.S. Supreme Court in Washington, D.C., U.S., on Monday, March 28, 2022. The Senate's plans to vote last week on legislation to strip Russia of its trade status with the U.S. were scuttled by a dispute over the language of a human rights provision. , Bloomberg

(Bloomberg) -- The US Supreme Court let President Joe Biden’s administration keep using its formulas for estimating the social cost of greenhouse gas emissions when regulating energy and infrastructure projects, giving the White House at least a temporary boost in its efforts to slow climate change.

The justices, without explanation or noted dissent, rejected calls from 10 Republican-controlled states led by Louisiana to reinstate former President Donald Trump’s cost-estimation approach while they pursue litigation to block the Biden policy in a lower court. The Biden method pegs the costs at a much higher rate, meaning more stringent regulation.

The Biden formulas, developed by a White House working group, are designed to guide agencies as they weigh the climate consequences of proposed projects and consider the costs of new regulations. The calculations ultimately could have a sweeping impact, affecting oil and gas leases as well as regulations covering agriculture, power plants, construction and fuel-efficiency standards.

“The estimates are a power grab designed to manipulate America’s entire federal regulatory apparatus through speculative costs and benefits so that the administration can impose its preferred policy outcomes on every sector of the American economy,” the states argued in court papers.

US Solicitor General Elizabeth Prelogar, representing the Biden administration, said the challenge was premature, arguing that the states must wait until the estimates translate into something more concrete. The estimates, currently in place on an interim basis, are based on formulas used when Barack Obama was president and later scrapped by Trump.

“If and when an agency relies on those estimates in issuing a rule or taking other reviewable action that injures the applicants, they may challenge that particular final agency action and argue that its reliance on the estimates renders it unlawful,” Prelogar argued. “But applicants may not maintain this executive-branch-wide challenge to the interim estimates divorced from any concrete agency action.”

A New Orleans-based federal appeals court blocked Cain’s ruling. The panel, which included two Democratic appointees and one Republican appointee, said the states hadn’t shown they were harmed by the interim estimates.

The Louisiana-led group of states then asked the Supreme Court to let the Cain order go back into effect.

Justice Department lawyers have said that suspending the formulas would potentially derail environmental reviews for as many as 60 major infrastructure projects.

The Supreme Court is separately considering a case that could limit the Environmental Protection Agency’s power to control greenhouse gas emissions from power plants. The justices are scheduled to rule in that case by late June or early July.