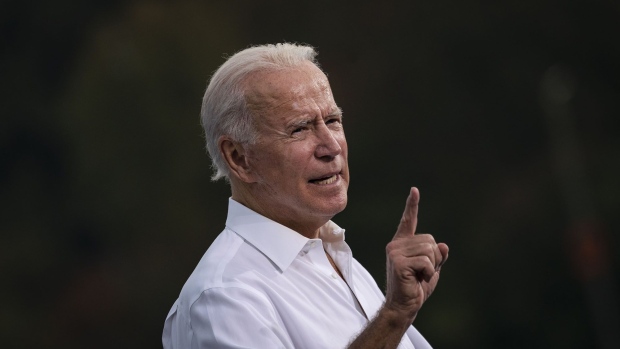 President-elect Joe Biden warned on Monday that the U.S. was facing a “dark winter” as the coronavirus continues to spread unabated, taking a somber tone to address the country even as scientists celebrated positive news about a potential vaccine.

“There’s a need for bold action to fight this pandemic. We’re still facing a very dark winter,” he said in remarks after meeting with his newly appointed coronavirus task force.

Biden is unable to take the reins of the country’s response until he’s inaugurated on Jan. 20, so he used the crux of his speech to implore Americans to wear masks and continue practicing social distancing.

The speech followed the first time Biden and Vice President-elect Kamala Harris met with their COVID-19 advisory council, which will help the transition team develop a dramatically different approach than President Donald Trump’s to contain the pandemic. The 13-member task force is composed largely of doctors and public health experts, who will work with incoming administration to map out its pandemic response.

The task force was announced only hours before positive preliminary test results were released of a Covid-19 vaccine being developed by Pfizer Inc. and BioNTech SE indicating it prevented more than 90 per cent of infections. The study involved tens of thousands of volunteers.

Eight months into the worst pandemic in a century, the preliminary results pave the way for the companies to seek an emergency-use authorization from regulators if further research shows the shot is also safe.

“At the same time,” Biden said, “it’s clear that this vaccine, even if it is approved, will not be widely available for many months yet to come.”

That’s true even if it easily clears the remaining hurdles, including the need for additional safety data, a regulatory review and distribution at 94 degrees below zero Fahrenheit. With enough doses for just 25 million people, masks offer a way to avoid the pathogen until a vaccine is widely available, and Biden’s message seemed to suggest patience will be required.

From the onset of the pandemic, Biden said it was critical to listen to scientists and medical experts in charting a path out of the pandemic. He staked much of his presidential campaign on striking a contrast with Trump, who repeatedly downplayed the dangers of the virus even after being hospitalized when he contracted it.

The transition’s coronavirus task force will be led by former Surgeon General Vivek Murthy, former Food and Drug Administration Commissioner David Kessler, and Marcella Nunez-Smith, a professor of public health at Yale University. It will include about a dozen people, many of whom were already advising Biden and his staff throughout the campaign. Kessler and Murthy, in particular, were deeply involved in shaping the Biden campaign’s plans for responding to the virus, and they both regularly briefed the president-elect.

The transition and the task force must figure out how to implement the policies Biden has proposed, including identifying supply chain issues for vaccine distribution and increased testing.

The task force will also include Atul Gawande, a surgeon at Brigham and Women’s Hospital, Michael Osterlohm, director of the Center for Infectious Disease Research and Policy at the University of Minnesota, Celine Gounder, a professor of Medicine and Infectious Diseases at New York University and Ezekiel Emanuel, a former Obama administration health adviser.

Other members are Luciana Borio, vice president at In-Q-Tel, Rick Bright, the former director of the Biomedical Advanced Research and Development Authority, Julie Morita, the executive vice president of the Robert Wood Johnson Foundation, Loyce Pace, president of Global Health Council, Robert Rodriguez, a professor of emergency medicine at the UCSF School of Medicine, and Eric Goosby, an expert on infectious diseases and professor of medicine at the UCSF School of Medicine.

The coronavirus has infected 10 million people in the U.S. and killed more than 237,000 as daily case counts continue to rise and set records. Biden campaigned on shepherding an aggressive federal effort to contain the virus and renewed that promise on Saturday night.

The National Association of Manufacturers, which tends to support Republicans, issued a statement praising Biden’s “consistent message on how to control the pandemic in order to bring our economy back and save jobs and lives.”

While the task force and the transition team will be laying the groundwork for a muscular federal approach, the president-elect cannot officially implement policy changes until he’s in office.

During the campaign, Biden released a plan to combat the coronavirus that said his response would aim to restore trust in the government, create a cohesive national strategy, make treatments affordable, provide economic relief to those impacted by the virus and work with other countries to stop the virus’ spread.

His plans also call for a national masking mandate, though Biden has acknowledged that would be difficult to enforce outside federal property, as well as expanded access to testing and the development of a vaccine that would be provided for free.