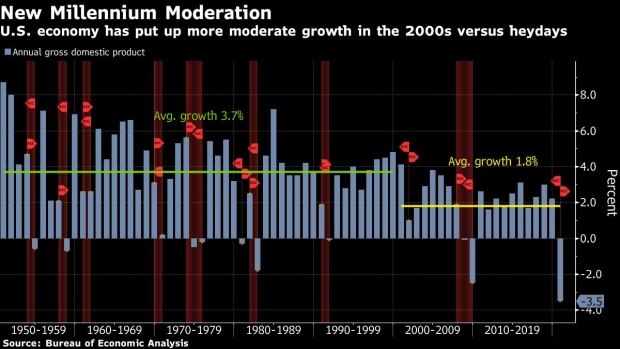 (Bloomberg) -- The next phase of President Joe Biden’s legislative agenda is fast taking shape, with an economic-recovery package that will potentially far surpass his $1.9 trillion virus-relief plan in size, complexity and overall ambition.

The White House and congressional Democrats are busy plotting strategy for the proposal, which could be unveiled next month, kicking off a legislative process that may culminate by August.

The centerpiece will be possibly the biggest infrastructure-spending commitment since the New Deal -- including roads, bridges and rural broadband internet. Progressives are eyeing much more, such as an expansion of Obamacare and a public-sector jobs program, along with tax measures including an increase in the capital-gains levy.

But stuffing it with too many controversial proposals could threaten its approval or force it to be broken up, and put in peril the Democrats’ thin majorities in the 2022 midterm elections. Still, Democrats see a narrow opening to forge Biden’s legacy: not just restoring the U.S. economy to its pre-pandemic state, but reversing the trend of sluggish growth in recent years with the most far-reaching measures in decades.

Biden’s virus-relief package is “going to help us get us back on the growth pattern we were on before,” said Virginia Representative Don Beyer, who, as incoming chair of the Joint Economic Committee, is a leading Democratic macroeconomic-policy voice. “The genius of the second plan is that it gives us the opportunity to punch GDP up above the long-term trend,” he said in an interview.

During his campaign, Biden proposed $2 trillion for economic rebuilding, a step up from the $1.5 trillion level proposed in the House last year, which Democrats are now calling a “floor.”

Biden is aiming to succeed where Donald Trump and other predecessors have failed, when funding disputes stymied measures that economists say are vital to boosting long-term productivity. The president is selling the package as a way to counter China, which has deployed public investment not only to boost its own growth but to build global influence as well.

As challenging as it may be to enact, such arguments may make the core infrastructure piece likely to be the easiest component to get through Congress.

Bipartisan support for improved highway, transit, waterway and flood-mitigation work is strong, while deficit concerns are at the lowest level in decades. There’s also a Sept. 30 deadline in Congress for reauthorizing surface-transportation funding -- offering a ready-made vehicle for pursuing infrastructure measures.

“Much of our infrastructure is nearing the end of its useful design life,” said Thomas Smith, executive director of the American Society of Civil Engineers, which will issue its latest quadrennial report card on U.S. infrastructure on March 3. “We’ve neglected it for far too long, and we’ve watched other countries continue to invest and continue to move ahead of the United States.”

The ASCE’s last assessment, in 2017, was a D+. Back then, it estimated the U.S. needed $4.5 trillion in infrastructure spending over the following 10 years. With about $2.5 trillion in estimated outlays already in train, that left a $2 trillion gap -- which Biden’s proposal could largely fill.

Congressional Budget Office figures indicate that a $1.5 trillion package would be equivalent to all federal spending on transportation and water infrastructure in the 14 years through 2017.

But infrastructure could become ensnared by a push among liberal lawmakers to tack on a raft of other items, from creating a government-run health insurance plan and making unionization easier, to a pathway to citizenship for undocumented immigrants and a carbon tax.

Meanwhile, House moderates in swing districts are facing the perils of redistricting ahead of the midterms, and could insist on limiting the scope of the bill to rein in its cost and limit partisan battles. Fights could also emerge over formulas for divvying up the money among states and cities.

Congressional Progressive Caucus Chair Pramila Jayapal said Thursday her large cohort of House Democrats will decide in the coming weeks which elements to advocate in the package -- including whether to use it as an opportunity to roll back Trump’s tax cuts for the wealthy.

Jayapal’s group was instrumental in attaching to the pandemic-relief plan an increase in the hourly minimum wage to $15, something that’s become easily the most controversial potential holdup for that bill.

The progressive caucus has proposed a $2 trillion infrastructure bill, and is already advocating that it include expanded child and elder care.

The question of funding, whether by raising taxes or issuing more debt, also looms large, and many Republicans are set to be vociferous in opposing much of the plan.

Senate Finance Committee Chairman Ron Wyden is expected to propose tax hikes, including equalizing ordinary income and capital-gains levies for those making more than $1 million a year and ending the deferral of capital gains. He’d also change international tax provisions in the 2017 tax law and close the carried-interest loophole, according to a Democratic aide.

Some lawmakers favor raising the federal gasoline tax -- now 18.4 cents a gallon and 24.4 cents for diesel -- for the first time since 1993, though Wyden in 2019 expressed opposition to the idea, calling it regressive.

Treasury Secretary Janet Yellen, who argues that deficit spending makes more sense with interest rates historically low, said on CNBC last week that “certainly part of the package, the parts that are permanent, will be paid for in order to not raise long-term deficits.”

While the yield on 10-year Treasury notes has risen markedly in recent weeks, Friday’s level of 1.34% is far below the 50-year average of about 6.16%.

“There’s a lot of appetite to do something this year,” said Jeff Davis, a senior fellow at the Eno Center for Transportation. “But there seems to be no appetite to pay for it.”

Despite all the hurdles, Biden has a strong hand. Upgrading and maintaining infrastructure acts as its own stimulus, unleashing real demand for equipment makers, materials suppliers and, most importantly, workers.

Nucor Corp., Cleveland-Cliffs Inc. and U.S. Steel Corp., the country’s three largest steel producers, have been lobbying through their industry groups since the election to persuade lawmakers to back whatever infrastructure package the Biden administration puts forth.

Such spending would also be a huge boon for Caterpillar Inc., one of the world’s largest machinery makers, which attributed a drop in North American construction-equipment sales to weaker demand for pipelines and road construction.

There’s also the potential for a long-term payoff, if investments translate into productivity gains -- such as savings on shipping and commuting costs when roads, rails and ports are improved, or avoiding the kind of power-grid failures on display this month in Texas.

“We cannot throw all fiscal discipline to the wind, but the standards for fiscal prudence have indeed changed in light of the global decline in the normal structure of interest rates,” said David Wilcox, a senior fellow at the Peterson Institute for International Economics, and a former Federal Reserve and Treasury official.