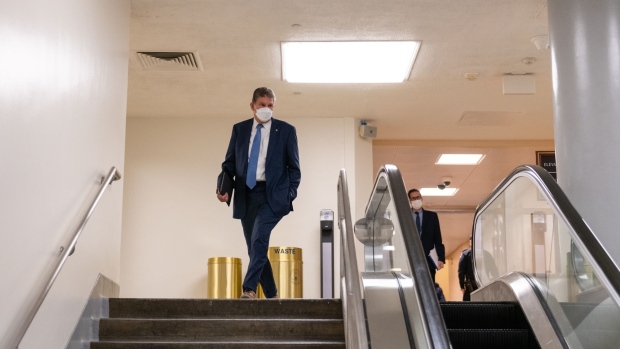 Senator Joe Manchin, a Democrat from West Virginia, arrives at the Senate subway at the U.S. Capitol in Washington, D.C., U.S., on Wednesday, Jan. 19, 2022. Senate Democrats edged closer to handing the White House another defeat as the chamber took up voting-rights legislation with extraordinarily long odds in the evenly divided chamber. , Bloomberg

(Bloomberg) -- Joe Biden blamed the setbacks that shaped his first year as president on a cascade of communication failures, yet by the end of a nearly two-hour news conference Wednesday, he had committed another potentially significant -- and telling -- misstep.

Answering a question about the threat of a Russian invasion into Ukraine, Biden said the U.S. and its allies had yet to agree on how to hold Moscow accountable over “a minor incursion.” The remark risked undermining weeks of escalating warnings from American diplomats and prompted White House aides to clarify -- before Biden had even concluded speaking -- that any troop movement across the border would prompt “a swift, severe, and united response.”

The moment epitomized the challenges Biden has faced since taking office after a bitterly contested election, now weighing on Democrats’ efforts to keep their narrow majorities in Congress. Engulfed by the coronavirus pandemic that’s yet to show signs of easing, Biden has struggled to reconcile sweeping campaign rhetoric and bold ambitions with the reality of governing and the challenge of strategically articulating his agenda.

That tension played out time and again through Wednesday’s news conference, as Biden alternated between defiantly defending his approach and outlining the concessions and strategic recalibrations he’s now considering.

In one example, Biden said he believed he could get his signature Build Back Better legislation into law by getting “out on the road a lot, making the case around the country.”

But later, the president said he only expects “chunks” of the bill to be passed and that Democrats would have to “break the package up.” While the president said there was popular support for climate and child care provisions, he allowed that he’d probably abandon two personal priorities, an extension of his expanded child tax credit and free tuition for community college.

As Biden spoke from the East Room of the White House, Senator Joe Manchin – the West Virginia Democrat who effectively killed the original version of the bill – took to the Senate floor to reiterate his opposition to Biden’s proposed filibuster carve-out for voting rights legislation.

Manchin’s counter-programming during what was only Biden’s second full press conference from the White House further underscored the president’s inability to unify his congressional allies, let alone a nation where tensions over government pandemic policies are boiling over.

Biden argued that despite the surge in cases from the omicron variant of the coronavirus, the nation was “in a better place than we have been thus far,” citing relief he signed into law and higher vaccination rates. Yet he also said the White House should have more quickly expanded testing before omicron arrived in the U.S., and acknowledged that continued school closures could badly hurt Democrats in November’s midterm elections.

The president also fielded multiple questions about a speech in Atlanta earlier this month in which he likened lawmakers who blocked voting rights legislation to Confederate leaders and infamous segregationists including Bull Conner, the Birmingham, Alabama, public safety commissioner who ordered civil rights protesters attacked with fire hoses and dogs. Republican lawmakers expressed offense and even House Speaker Nancy Pelosi, a fellow Democrat, suggested the metaphor was outdated.

Biden insisted he had been misinterpreted and that the comparison was fair, going as far as to mock a reporter for what he called an “interesting reading in English” of his remarks.

Still, the president later allowed that he had failed to break through with Black voters on the issue.

“I find myself in a situation where I don’t get a chance to look people in the eye because of both Covid and things that are happening in Washington,” Biden said. “To be able to go out and do the things that I’ve always been able to do pretty well.”

More broadly, Biden insisted that he “did not over-promise” on the campaign trail when he pledged to heal U.S. political divisions aggravated during the presidency of Donald Trump.

“I have probably outperformed what anybody thought would happen,” Biden said. He added that he did not believe polls, which presently show most U.S. voters disapprove of his performance.

But he conceded that he had not imagined the continued sway Trump would hold over the GOP, or the extent to which Republicans would resist his agenda.

“I did not anticipate that there’d be such a stalwart effort to make sure that the most important thing was that President Biden didn’t get anything done,” he said. It was a remarkable statement from a man who served as vice president to Barack Obama, who faced near-uniform Republican opposition from nearly his first day in office.

The key for Biden and his party, facing midterm elections in which Republicans are poised to seize control of the House, Senate or both, will be papering over perceptions that his performance has failed to match his rhetoric.

His news conference amounted to almost a literal rebuttal of Republican suggestions that the nation’s oldest-ever commander-in-chief is physically and mentally unsound. At an hour and 52 minutes, the session was longer than any conducted by Obama or Trump, and Biden took questions from two dozen reporters, including several representing partisan news organizations hostile to this White House.

His Russia misstep aside, Biden appeared confident and in command of his material.

He outlined his approach to winning back the support of voters, saying that he’s “satisfied” with his current staff but would seek more “constructive criticism” from people outside the White House.

He repeatedly portrayed Republicans as a party bereft of any agenda besides stopping him. “What are they for?” he asked rhetorically.

And he said his polling had indicated voters didn’t like to see him overly engaged in the legislative process, and that he would be “deeply involved” in the midterm elections.

“Get out of this place more often,” Biden said. “I’m going to make the case as to what we’ve already done, why it’s important and what will happen if they support what else I want to do.”