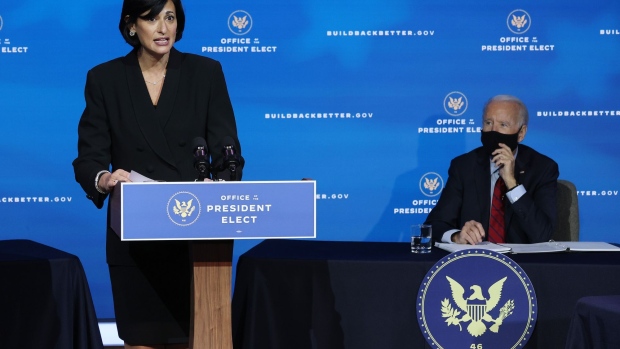 (Bloomberg) -- The new leader of the Centers for Disease Control and Prevention is confronting two difficult missions at the same time: Leading the agency’s Covid-19 response amid the pandemic and trying to restore the agency’s stature after its profile was diminished during the Trump administration.

Rochelle Walensky, who most recently was chief of infectious diseases at Massachusetts General Hospital, has treated patients on the front lines of the Covid-19 outbreak. The director’s post doesn’t require Senate confirmation, and Walensky took office last week.

She arrives in an accelerating crisis: More than 140,000 Americans have died from Covid since her appointment was announced Dec. 7. While new cases have slowed over the past two weeks, new variants of the SARS-CoV-2 virus are spreading faster, threatening to sicken and kill even more.

Walensky inherits an agency whose reputation has been tarnished. Early in the pandemic, the Trump administration halted the CDC’s briefings and the agency faded from view. By the fall, mounting evidence showed how administration officials interfered in the agency’s work, slowing down publication of guidance and stalling access to $1 billion in pandemic aid Congress intended for the agency.

Hours after President Joe Biden’s inauguration, Walensky ordered a “comprehensive review” of all CDC guidance on Covid. Guidelines would be updated “so that people can make decisions and take action based upon the best available evidence,” she said in a news release.

“We recognized, early on, that getting the right person to lead CDC was really, really important,” said Jeff Zients, who served as Biden’s transition co-chair and now is White House COVID-19 Response Coordinator. “It was important because we were in the middle of a pandemic, and also for returning CDC to where it should be -- which is science- and fact-based. That was an important thing to do overall.”

Biden’s national Covid response strategy released on Jan. 21 describes some of the work ahead for the agency: the CDC should update guidance with ways to monitor Covid’s spread in settings like health-care facilities, schools, workplaces and the broader community. The recommendations should include “metric-driven reopening guidance that the federal government communicates widely,” according to the plan.

The CDC also will deploy support teams to help schools with Covid testing, create a testing plan for the federal workforce and work with states to address inequities in Covid response.

Walensky, a Harvard medical school professor and practicing physician before taking the CDC post, is new to government leadership. Raised in Maryland, she went to Washington University in St. Louis, medical school at Johns Hopkins University, and Harvard University for a master’s of public health.

She began her medical career in the midst of the HIV crisis and advised U.S. and global health authorities on the virus. Before taking over the CDC, she occupied the prestigious position of chief of infectious diseases at Massachusetts General Hospital.

Biden’s transition team conducted a wide search for a new CDC director, and Walensky’s name was mentioned by several people, according to an official familiar with the process. For some, she was a surprise choice. Yet among those recommending her was Anthony Fauci, director of the National Institute of Allergy and Infectious Diseases, who is serving as a medical adviser to Biden.

“One of the key people we talked to was Dr. Fauci, and Dr. Fauci really believed that Dr. Walensky was the right person to lead the CDC, so that was obviously an important recommendation,” Zients said. “In Dr. Walensky, we were able to find someone with the experience and the background to lead the CDC and that turnaround.”

Celine Gounder, an assistant professor at the NYU Grossman School of Medicine who served on the Covid Advisory Board for the Biden transition, worked at Mass. General under Walensky, and considers her a mentor.

“She’s just a really warm, empathetic, funny person, and I think is a pleasure to work with and work for,” she said. “If you’re looking for somebody that’s going to lead with science, but also with empathy and kindness and will be a good leader, I think she’s an excellent choice.”

The CDC declined to make Walensky available for an interview. In a live-streamed interview with JAMA Network on Jan. 19, she said the agency’s scientists and civil servants need to have their value recognized.

“They have been diminished. I think they’ve been muzzled, that science hasn’t been heard,” Walensky said. “So I have to fix that.”

Repairing the agency’s reputation also will require reckoning with early missteps that set the U.S. response behind during crucial weeks. Problems with test kits left authorities blind to the virus’s spread.

The CDC should “have a very open internal and external assessment of the things that went wrong, particularly the rollout of the laboratory tests, which was very problematic,” said Tom Frieden, who led the agency in the Obama administration and now serves as president and CEO of Resolve to Save Lives, a global health nonprofit. (The group receives funding from Bloomberg Philanthropies.)

Part of the CDC director’s job is navigating between the agency’s Atlanta headquarters, filled with labs and scientists, and the power centers of Washington.

“If Washington gets too far ahead of Atlanta, there’s going to be a disconnect,” said Marcus Plescia, chief medical officer of the Association of State and Territorial Health Officials, who worked at the CDC for five years.

Walensky also will have to face dissatisfaction among some career officials and staff at the CDC that goes beyond its role in pandemic response. In July, more than 1,000 employees signed a letter protesting “acts of racism and discrimination” at the agency and calling for more Black representation among leadership, according to media reports.

The new director acknowledged that her status as an outsider to the CDC confers both advantages and handicaps.

“I will have all of the benefit of coming in from the outside and being able to look in and say: This feels really broken,” she said in the JAMA interview.