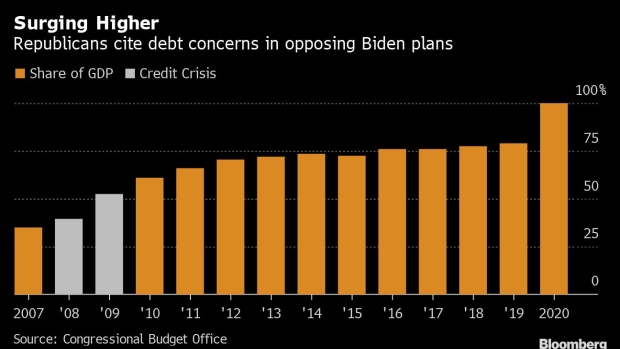 Senator Mitt Romney, a Republican from Utah, wears a protective mask as he walks through the U.S. Capitol in Washington, D.C., U.S., on Monday, March 15, 2021. Senate Majority Leader Schumer said it's possible he'll use a Democrat's only method to pass President Biden's infrastructure plan with budget reconciliation. , Bloomberg

(Bloomberg) -- President Joe Biden’s next big economic package helped set off a heated debate among Republicans over whether to participate in the return of lawmakers’ dedicated-spending projects, known as earmarks, a tussle that could be key to its success.

After muscling his $1.9 trillion pandemic-relief bill through Congress without a single Republican vote, Biden is hoping to bring GOP members aboard an infrastructure package set to be a core part of his longer-term economic plan, estimated at trillions of dollars.

Speeding a complex, multi-year initiative through Capitol Hill will be largely impossible without the GOP, due to Senate rules. To make negotiations easier, Democrats rescinded a 2011 ban on so-called spending earmarks. If Republicans decide to amend party rules in coming weeks and follow suit, it could be a good sign Biden’s bill gets done.

“I’ve always been in favor of members of Congress making the decisions and not bureaucrats,” Representative Sam Graves, the top Republican on the House Transportation Committee, said in an interview. He hopes for a decision within the GOP in the spring, while holding off on predicting the outcome.

Earmarks could allow the kind of trading between legislators that maximizes bipartisan support, and advocates say that greater transparency measures make wasteful spending less of a concern than in the early 2000s. Democrats plan to allow them on transportation and water infrastructure bills as well as annual appropriations bills. Earmarked spending will be capped, disclosed on the Internet and certified not to benefit the lawmaker or her family.

But fiscal hawks in the GOP remain bitterly opposed.

“We should be solely focused on stopping the Democrat attacks on our liberties and winning back the House of Representatives and I don’t see how that helps us,” said Representative Jim Jordan, a conservative Ohio Republican. With federal U.S. debt surpassing 100% of GDP, embracing earmarks would be more harmful to the overall public good than any specific benefit to a member’s district, he said.

House GOP leaders discussed earmarks at a March 8 meeting, but lawmakers who attended said the group was unable to make a decision or set a deadline for one. Steve Scalise, the party’s No. 2 in the House, said there’s no timeline yet.

Senior House Republicans like Kevin Brady, the party’s top representative on the Ways and Means Committee, say they are undecided.

In the Senate, Minority Leader Mitch McConnell told reporters last month he doesn’t have a position. While McConnell is a longtime member of the Appropriations Committee -- a historic bastion of earmarking -- McConnell is expected to take the temperature of his conference before weighing in.

Derided by opponents as pork-barrel politics, earmarks were especially tarnished by a bribery scandal and an Alaskan “bridge to nowhere” in the early 2000s. Republicans led the way in banning them in 2011 after they took over the House.

But they could prove useful amid the bitterly partisan divide in today’s Congress, some say.

“I am a big fan of bringing back earmarks in order to get not just the Biden agenda but to get the congressional agenda, the agenda for members of both parties, passed,” said Jane Mansbridge, a Harvard University professor who specializes in legislative negotiation. “The new way of looking at these earmarks which makes them transparent -- they are going to be audited afterwards, there are provisions against conflict of interest -- allow them to be used in negotiations, and that is particularly important right now,” she said.

But American Enterprise Institute scholar Norm Ornstein said they’re no magic bullet. Even with earmarks coming back, Republicans will battle over big-ticket items like universal broadband internet, he said.

Benefits will be limited “if Republicans decide the best midterm strategy is uniting to oppose whatever Biden does. That strategy allowed the GOP to retake the House in the 2010 midterms and Senate in the 2014 midterms,” Ornstein said.

And a spectrum of Republicans opposes them. Along with conservative groups like Heritage Action, moderate Utah Senator Mitt Romney isn’t a supporter of bringing earmarks back.

“They have been associated with excess and would represent a turn to the worst,” Romney said. “It’s just unnecessary spending and projects that are not necessarily in the national interest but are more akin to the seniority of a particular individual to ask for a particular benefit.”

Romney predicted that most Republicans agree with his view. Representative Patrick McHenry of North Carolina disagreed, saying that while he personally won’t request earmarks, he estimated about 60% of members supported bringing them back.

Democrats said they think Republicans will go along once they see billions of dollars set to flow to Democratic districts.

“I’m perfectly willing to divide it equally between Republicans and Democrats, and so it will be up to them if they want it. If they don’t, we’ll just have it on the Democratic side,” said Senate Appropriations Committee Chairman Patrick Leahy. “But I think enough of them would like to have it on both sides.”

A decision on earmarks in the Senate depends on buy-in from Republicans.

Senate Environment and Public Works Chairman Tom Carper said that the final decision on whether to allow earmarks in his version of the bill hasn’t been made yet.

“We’re having conversations about that,” he said “Nothing definitive yet.”

House Speaker Nancy Pelosi said in a statement on Friday, “building our transportation system has long been bipartisan. It is our hope that spirit will prevail as we address other critical needs in energy and broadband, education and housing, water systems and other priorities.”