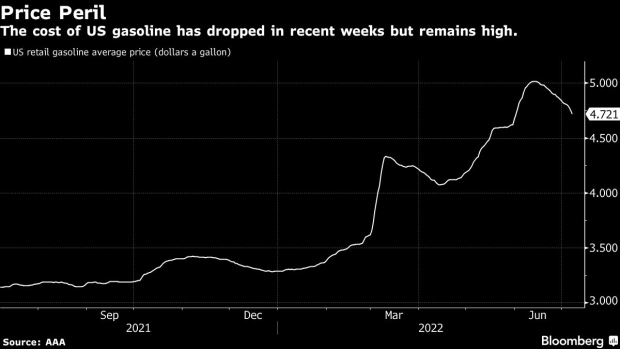 Even if Joe Biden secures a pledge for more oil when he visits Saudi Arabia next week, it may do little to drive down the high fuel prices roiling the global economy.

The US president’s visit to a country he once vowed to isolate represents a significant thawing of relations, but the Saudis and their OPEC partners have limited spare production capacity to offer in return for this political concession. Some market watchers also question whether tapping this supply buffer would calm energy markets, or just make matters worse.

“A surge in Saudi production seems unlikely,” said Ben Cahill, senior fellow at the Center for Strategic and International Studies. “Saudi Arabia and OPEC+ have very limited spare capacity, and they have to manage it carefully.”

Oil prices retreated last week, but remain above $100 a barrel. World crude production and refining output are still struggling to keep pace with the post-pandemic rebound in demand and the supply disruption resulting from sanctions on Russia over the invasion of Ukraine. The price of gasoline remains a source of political peril for a president heading to mid-term elections with approval ratings near 40%.

Biden said his visit to the Middle East, which includes a stop in Israel, will focus on security issues rather than energy supplies. He said he won’t specifically ask Saudi King Salman or Crown Prince Mohammed Bin Salman to raise oil production. Nevertheless, the trip represents a reversal for the president, who previously vowed to recalibrate America’s relationship with the kingdom after the 2018 murder of regime critic Jamal Khashoggi.

The Saudis have already offered up one gesture of reconciliation before Biden’s visit by steering the OPEC+ alliance to speed up its output increases this month and next -- rolling back the last of the production cuts introduced at the outset of the Covid-19 pandemic in 2020.

Biden has signaled he wants exporters around the Persian Gulf to do even more, which is where questions about spare capacity come to the fore.

Saudi Arabia and the United Arab Emirates are the only members of the Organization of Petroleum Exporting Countries with significant volumes of unused output. Together they currently have a buffer of about 3 million barrels a day, official data from the countries indicate.

That’s about 3% of global oil output, and roughly equivalent to the amount of Russian oil that could be kept off the market by sanctions at year-end, according to the International Energy Agency. But the margin of emergency supplies could be even narrower than official figures indicate.

French President Emmanuel Macron was caught on camera at the G-7 summit last month, telling Biden that UAE ruler Sheikh Mohammed bin Zayed had admitted to him that Abu Dhabi is at “maximum” production and the Saudis can only increase “a little more.”

The UAE’s Energy Minister Suhail al Mazrouei promptly sought to clarify that it his ruler been referring to quota limits agreed with fellow OPEC+ members, but uncertainty persists. Shell Plc CEO Ben van Beurden warned on June 29 that the world faces an “ever-tighter market” and a “turbulent period” because OPEC has less spare capacity than assumed.

State-run giant Saudi Aramco says it can reach and sustain maximum production of 12 million barrels a day. OPEC data show the country has only held this level for a single month, April 2020, in its many decades as a major oil producer.

The kingdom didn’t make full use of its OPEC+ quota in May, pumping about 125,000 barrels a day less than it could have, despite international pleas for more supply, the group’s data show. RBC Capital Markets estimates that there may be “near-term soft ceiling” of 11.5 million barrels a day, with more drilling needed to reach higher levels.

“There’s a realization that Saudi Arabia doesn’t have much to bring to the table in terms of supplies, at least for the time being,” said Bill Farren-Price, a director at Enverus Intelligence Research.

As a result, Saudi Arabia and the UAE may offer a generic pledge to stabilize world oil markets while keeping their “spare production capacity dry” for a period of even tighter supplier expected later in the year, said Bob McNally, president of Washington-based consultant Rapidan Energy Group and a former White House official.

“There’s no magic wand for any president in this situation,” said McNally. “The best you can do is ask OPEC, and they don’t have much to give.”

If the Gulf nations were to fully tap their spare capacity, it could backfire. Traders tend to grow anxious when the global market has nothing held in reserve to cover potential disruptions. The recent collapse of production in OPEC member Libya due to renewed unrest has served as a reminder of the perennial risks to global production.

“They’re going to be judicious on how they deploy any remaining spare barrels,” said Helima Croft, chief strategist at RBC Capital and a former CIA analyst. “I don’t think they want to exhaust all of their spare capacity as part of a strategic reset with the US.”

Setting aside all the potential risks and rewards related to OPEC’s crude flows, there’s one pressing problem they can do little to solve -- the lack of capacity around the world to make gasoline, diesel and jet fuel.

US refineries are operating at 95% of capacity, the highest in almost three years, as they strain to keep up with peak summer fuel demand. Years of underinvestment, coupled with the disruption to Russian oil-product exports, have spurred the White House to consider restarting mothballed refineries.