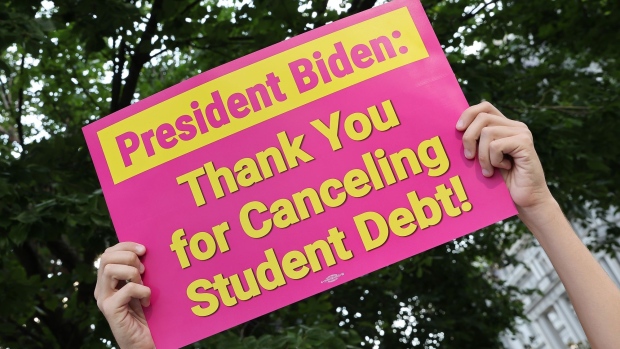 Biden in August announced student debt relief of $10,000 per borrower, subject to income caps of $125,000 per individual and $250,000 per household. An additional $10,000 can be forgiven for Pell Grant recipients. The CBO says that the move will reduce the present value of outstanding loans by $400 billion based on 30 years of reduced future cash inflows.

The non-partisan budget agency said Biden’s suspension of student debt payments through the end of the year could cost an additional $20 billion. It did not account for changes Biden made to income-driven repayment plans. The watchdog Committee for an Responsible Federal Budget pegs the cost of those changes at an additional $120 billion.

Read More: Follow These Steps to Get Your Student Loan Forgiveness

However, the CBO says its estimate is “highly uncertain” because of assumptions it makes about the level of repayments that would have occurred absent the debt relief depend on future economic conditions.

For comparison, the tax and climate legislation known as the Inflation Reduction Act, which passed earlier in August, was scored as reducing deficits over 10 years by $58 billion, with an additional reduction of $180 billion factored in from anticipated new revenue from more tax audits.

“This might be the most costly executive action in history,” CRFB President Maya MacGuineas said in a statement. “It’s unacceptable that the president would implement it without offsets and without Congressional approval.”

The report was requested by Senator Richard Burr and  Representative Virginia Foxx, two North Carolina Republicans. GOP lawmakers have criticized Biden’s debt forgiveness as unfair to students who had paid off their loans and to taxpayers who never went to college.

“Rather than working with Congress to bring down college costs, President Biden has opted to bury the American people under our unsustainable debt,” Foxx said in a statement.

The Biden administration and its allies countered the criticism of the student debt plan.

“It gives people who have been struggling with student debt that shot they want at starting a business, buying that first home, or just having a slightly easier time paying the monthly bills,” Abdullah Hasan, an administration spokesperson, said in a statement.

“In contrast to President Trump and Republicans who gave giant corporations $2 trillion in tax breaks, President Biden delivered transformative middle class relief by canceling student debt for working people who need it most,” they said in a statement.

(Updates with congressional, White House reaction, beginning in eighth paragraph. An earlier version corrected the time span for the cost and eliminated a comparison to earlier legislation)