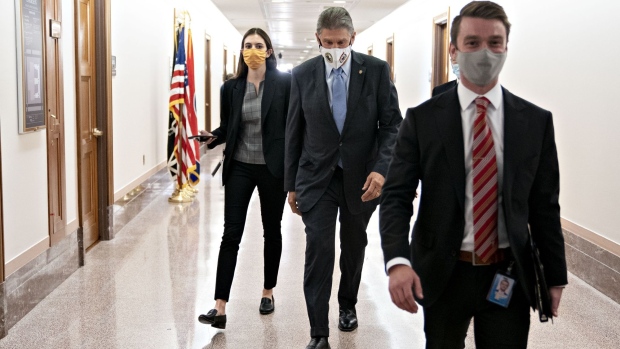 Senator Kyrsten Sinema, a Democrat from Arizona, stands on an elevator after a meeting at the U.S. Capitol in Washington, D.C., U.S., on Wednesday, Oct. 27, 2021. Senate Democrats released the details of a proposed levy on billionaires, a new and logistically risky approach to taxation that lawmakers hope will help fund the White House's social spending aimed at low and middle-income Americans. , Bloomberg

(Bloomberg) -- President Joe Biden’s tax agenda, crafted by experts who worked on the proposals for years and wrote books about their ideas, is getting a wholesale revamp as Democrats battle to find a program their caucus can unite behind.

Amid diplomatic -- at least in public -- bickering among the chairs of the House and Senate’s top tax-writing committees and other stakeholders, the two main takeaways as of Wednesday evening were: the bulk of former President Donald Trump’s 2017 tax cuts will be left in place, while corporations will face a new minimum levy.

It’s far from clear what measures will make the final cut as lawmakers negotiate over the revenue-raisers to pay for what could be a $2 trillion social-spending bill.

Wednesday began with details of a Senate plan for a new billionaires’ tax and Majority Leader Chuck Schumer announcing his hope for a framework deal by day’s end. By evening, the House had rejected that billionaire levy and Senate Budget Committee Chair Bernie Sanders said “it’s not conceivable” for an agreement that night.

Comments from lawmakers indicate that some of Biden’s core proposals -- including increasing the corporate income tax rate, the top marginal income tax rate and the capital gains rate -- are likely out, while other, more creative ideas, --like a minimum tax on the profits on corporate financial statements and a surtax on millionaires -- were still in the running.

Senator Kyrsten Sinema of Arizona, a crucial swing vote for Democrats, has given the Biden administration a list of specific tax policies she will support in order to raise revenue for the social spending plan, people familiar with the matter said Wednesday night.

She would back the billionaires’ tax put forth by Senate Finance Committee Chairman Ron Wyden or a 3% income surcharge for earners above $5 million, as well as a 15% corporate minimum tax, the people said on condition of anonymity to discuss sensitive negotiations.

Some Democrats are frustrated their once-in-who-knows-how-long chance to make the tax code more progressive will, at best, be incomplete. What was originally envisioned -- and could still result -- was the first major comprehensive package of tax increases since 1993, the first year of the Clinton administration. With razor thin majorities in the House and Senate, there’s no telling whether Democrats will be able to come back for more after the 2022 midterm elections.

“It seems to be almost every sensible progressive revenue option that the president wants, that the American people want, that I want seems to be sabotaged,” said Sanders, a Vermont independent who caucuses with the Democrats.

The last-minute rewrite of the tax plan is the result of Democrats scrounging for tax options to appeal to two holdout Democrats, Sinema and Senators Joe Manchin of West Virginia. Sinema’s opposition to tax-rate increases and Manchin’s resistance toward a plan to require banks to report more tax data to the Internal Revenue Service may mean that Democrats will have throw out some of Biden’s ideas that raise the most tax revenue.

House Ways and Means Chairman Richard Neal said that the bill would have to “mollify” the demands of those two senators to make it through Congress. The eleventh-hour deal-making reflects the need for the caucus to stay united in face of concerted Republican opposition.

Democrats are also likely to abandon Biden’s ambitious proposal to expand inheritance levies, by removing a benefit that allows some assets to be passed to heirs tax-free, known as step-up in basis.

Scaling back presidential proposals is part of the typical legislative process in Washington. The executive branch proposes its grand vision, and then 535 members of Congress get to debate and revise that plan.

Yet Biden’s tax agenda has taken an unconventional path as lawmakers have picked some pieces and rejected others.

Some of the tax increases seen by many Democrats as politically the easiest -- reversing the Trump tax cuts on corporations and individuals, as well as eliminating the carried interest tax break for private equity -- are now candidates to get dropped. And some of the more complicated approaches -- like Biden’s plan for a corporate minimum levy on profits reported on financial accounts -- have the support of all 50 Senators.

White House Press Secretary Jen Psaki said at a briefing Wednesday that “the president certainly knows there’s some agreements and some disagreements about which components of a range of tax-fairness proposals are the best options. That’s why there are so many out there that he has proposed, that others have proposed, that what we’re doing now is working through what will be in the final package.”

Lisa Zarlenga, a former Treasury tax legislative counsel, still estimates that the Biden administration has managed to get quite a few of its proposals -- at least in part -- into the legislation being considered, when compared with previous presidents.An expansion of the net investment income tax -- a capital gains surtax on high-earners -- is still in the mix, and Congress has kept most of Biden’s plans to overhaul the international tax system in tact, with some minor changes, she pointed out.

But for many progressives, the tax increases weren’t just about finding dollars to fund new social spending, they were also about addressing wealth and income inequality. Besides the spending elements of the bill, the legislation was a chance to reshape the tax code to shift more of the burden on the wealthiest Americans -- who have many options to reduce or defer their tax bills.

“The lack of inclusion of both the corporate rate and the individual rate and the failure to include the capital gains rate -- that’s a big loss,” said Frank Clemente, the executive director of Americans for Tax Fairness. “We will come back another day.”