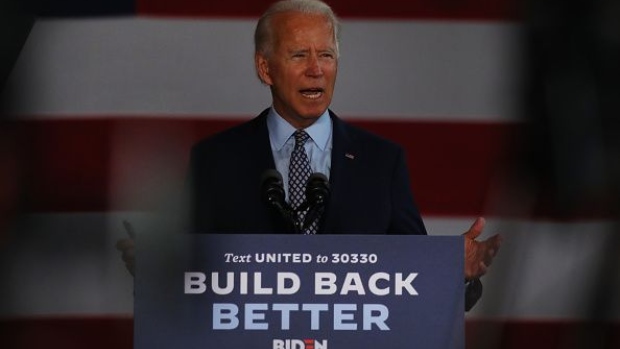 DUNMORE, PENNSYLVANIA - JULY 09: The presumptive Democratic presidential nominee Joe Biden speaks at McGregor Industries on July 09, 2020 in Dunmore, Pennsylvania. The former vice president, who grew up in nearby Scranton, toured a metal works plant in Dunmore in northeastern Pennsylvania and spoke about his economic recovery plan. With fewer than four months until the election, polls continue to show Biden leading in Pennsylvania, widely regarded as a battleground state in the race for the presidency. (Photo by Spencer Platt/Getty Images) , Photographer: Spencer Platt/Getty Images North America

(Bloomberg Opinion) -- Most major polls show that Joe Biden has pulled ahead of Donald Trump in the race for the White House. As such, it’s prudent to start considering what his policies may mean for the economy and financial markets, starting with his tax plan. When you get into the details, you realize that although Biden is widely regarded as a centrist Democrat, his proposed plan is anything but.

For starters, Biden credibly threatens to take a tax code that is already steeply progressive and make it even more progressive, with nearly all of the increased tax burden falling on the top 2% of taxpayers. That’s a problem for a couple of big reasons. For one, it would clearly discourage savings, investment, and business formation, potentially causing lasting economic damage. Plus, it wouldn’t do much to reduce income and wealth inequality.

At the center of Biden’s plan is the taxes on earnings used to fund Social Security. Currently, payroll taxes are only levied on the first $137,700 in income, subject to an annual cost of living increase. The employee and employer each pay 6.2% in Social Security tax; self-employed individuals pay both sides, or 12.4%. Biden proposed applying this tax to an unlimited amount of income above $400,000, leaving a “donut hole” between $137,700 and $400,000, which he expects will gradually narrow over time with inflation. Also, Biden wants to re-raise the top marginal tax rate from 37% to 39.6%.

In effect, the Social Security tax would cease being a payroll tax and would effectively serve as a new, higher marginal rate. Critics of payroll taxes have said the payroll tax is a regressive tax, but it’s intended to be that way. The original purpose of the tax was to ostensibly to fund each individual’s Social Security benefits, not fund general government revenues. Making the Social Security tax progressive, thereby increasing marginal rates into the 50% range for self-employed people, who would pay both sides of the tax, would be a huge disincentive to entrepreneurship.

The parts about inequality we find offensive (note that “billionaire” has become a pejorative term) is not remedied by Biden’s payroll tax. The people paying tens of millions of dollars for condos in New York City do not pay much in the way of payroll tax; they continue to earn most of their money through investment.

Taxing Social Security earnings above $400,000 won’t hit the top 0.1%--the people we like to think of the plutocracy--but it will hit the top 2%. That may not sound like much of a distinction, but there are members of the top 2% in every community in America. These are successful small business owners, along with professionals such as attorneys and physicians. They earn about $360,000 annually, compared with $2.8 million for those in the top 0.1%. That’s a big difference, especially in high cost of living areas. Also, about 20% of Americans will earn $250,000 in annually at least once in their lifetimes, which would put them near the top 2%.

There is a prevailing belief that the very rich are indolent (which I disagree with), but the top 2% are not. These are very hard working people, who might not have enough resources to hire high-powered legal or accounting help to shield their income from taxation.

I’m not in favor of raising any taxes, but if Biden really wanted to target extreme inequality, he would propose successively higher marginal rates on much higher levels of income – including investment income - starting at $5 million or $10 million. This discussion excludes Medicare taxes and state income taxes, which would take marginal rates well above 60%, and would easily be the highest in the world.

The chief complaint about our current tax code—that people of means pay a lower effective rate than everyone else—is a function of preferential treatment for investment income. And Biden’s tax plan does take that into account, raising taxes on long-term capital gains for incomes exceeding $1 million a year. But with Biden’s plan, billionaires would still pay lower effective rates than someone with a few restaurants that makes $400,000 a year.

Add it all up and Biden’s plan will only collect about $3.2 trillion over 10 years, after accounting for dynamic scoring, which is a pittance relative to the current $3 trillion federal budget deficit. The unfortunate thing is that if the government was really interested in boosting revenue, it would have to raise taxes on the middle class, but that is a political third rail. If Biden’s plan passes, our marginal income tax rates would become grotesque, with a hypothetical couple paying 24% in taxes on incomes up to $320,000, rising to 51% on $408,000 in income if that couple is self-employed. The U.S. has enjoyed strong rates of business formation, but that wouldn’t last very long if Biden becomes president and his tax plan becomes law.

Throughout the Democratic campaign, left-wing candidates spoke fondly of returning to the days of 90% tax rates in the 1950s. In a sense, those taxes were more fair, because they applied to extremely high levels of income. I never thought I’d say this, but I’d rather we return to those days then live under this monstrosity of a tax regime.