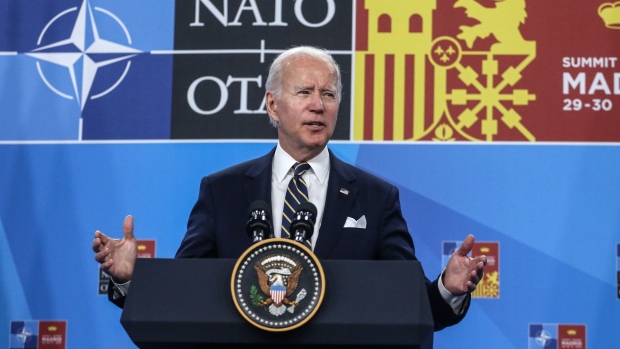 US president Joe Biden during a news conference following the final day of the North Atlantic Treaty Organization (NATO) summit at the Ifema Congress Center in Madrid, Spain, on Thursday, June 30, 2022. Biden said he told Turkish President Recep Tayyip Erdogan that he supported the sale of F-16 jets to modernize Turkey's air force, after the two leaders met following Ankara's decision to drop its opposition to NATO expansion. , Bloomberg

(Bloomberg) -- President Joe Biden left summits in Europe this week triumphant over NATO’s expansion and moves to further isolate and punish Russian President Vladimir Putin over the invasion of Ukraine.

But he returns to domestic political tumult that has allies at home and abroad concerned about his prospects leading the world’s most powerful democracy.

Biden’s participation in meetings with the Group of Seven in Germany and NATO allies in Madrid was eclipsed in US media by the fallout over the Supreme Court’s decision last week to end nationwide abortion rights, as well a bombshell congressional hearing that further detailed former President Donald Trump’s efforts to stop his successor from taking office.

Liberal Democrats are in an uproar over the court’s decision to overturn the landmark Roe v. Wade decision and increasingly agitated that the White House hasn’t more forcefully responded, adding to whispers within the Democratic Party that Biden should consider stepping aside in 2024.

With no end in sight to to soaring prices for gasoline, food and other everyday items, Biden’s public approval rating continues to slide under 40%, according to a polling analysis by FiveThirtyEight, deepening his party’s midterm election troubles.

In a seeming acknowledgment of his domestic challenges, Biden joked Wednesday, while meeting Spanish King Felipe VI in an ornate room at his palace, that “we may not go back” to the US.

And yet he departed Europe with inarguable victories. A deal to admit Sweden and Finland to NATO was sealed after Biden placed a last-minute phone call to Turkish President Recep Tayyip Erdogan.

Finnish President Sauli Niinisto and Swedish Prime Minister Magdalena Andersson both hailed the expansion. “It wasn’t an easy decision, but it was the right decision to make,” Andersson said Wednesday.

Biden’s negotiators also won new sanctions at the G-7 on trade in Russian gold and persuaded the group to pursue a price cap on Russian oil.

“Before the war started, I told Putin that if he invaded Ukraine, NATO would not only get stronger, but would get more united and we would see -- we’d see democracies and the world stand up and oppose his aggression and defend the rules-based order,” Biden said Thursday at a news conference in Madrid. “That’s exactly what we’re seeing today.”

But Biden and his aides spent the week denying that the summits had been overshadowed by the furor over the Roe ruling or by congressional hearings on the Jan. 6 insurrection, which this week featured a surprise witness who delivered new revelations about Trump’s efforts to personally participate.

The president told reporters that none of the leaders at the G-7 meeting in Germany had brought up the Roe decision.

His own profile in Germany, though, was decidedly low. His public schedule during the trip was lighter than at previous summits and included only a handful of formal one-on-one meetings with other leaders. He skipped a dinner hosted by German Chancellor Olaf Scholz on the second night of the G-7, and also left the summit before a discussion of the upcoming G-20 meeting in Indonesia -- a gathering of high concern to the US after the hosts extended an invitation to Putin.

European counterparts interpreted Biden’s absence at the G-20 discussion as a sign the president may choose to skip the Bali summit over Russia’s participation, according to a European diplomat.

During the few unscripted moments with other heads of state that reporters were allowed to observe, Biden looked intent on lightening the mood, vividly more dour than in previous years given the backdrop of the Ukraine war.

Senior White House officials said the president kept a full schedule of meetings behind the scenes at the G-7, including multiple encounters with UK Prime Minister Boris Johnson, whose colorful asides within earshot of reporters served to liven up the event.

The president played a key behind-the-scenes role in sealing the agreement with Turkey to advance Sweden and Finland’s NATO bids. The Nordic leaders wanted a gut check from Biden on Wednesday to make sure he approved of the deal they had struck with Erdogan. Leaving his meeting with King Felipe, Biden was briefed on the terms and then signed off on, according to a senior administration officials.

And Biden’s aides pointed to NATO’s decision to put 300,000 troops in Europe on high alert a prime example of allies meeting US objectives to bolster their military readiness and deter Russia.

His team was also responsible for pushing other G-7 countries to agree to language in a joint statement on the Russian oil price cap and calling out China’s aggressive economic behavior -- both unprecedented shows of unity among allies, in the White House’s view.

US allies publicly echoed Biden’s sentiment on the impact of the meetings.

“We are living a defining moment for European security and the international order,” Spanish Prime Minister Pedro Sanchez said on state television TVE. “What Putin is doing in Ukraine marks a tectonic shift in international relations. We have a lot at stake in how we respond and that’s why this summit was so important”

But Biden returns to a Washington absorbed with domestic challenges and controversies, with economic concerns dominating voters’ attention ahead of November midterm elections that the president’s party still looks poised to lose.

The president’s own political future is of increasing interest, as well. While he was gone, Vice President Kamala Harris had to clarify comments she made about his re-election intentions, fueling speculation once again about whether he’ll seek a second term.