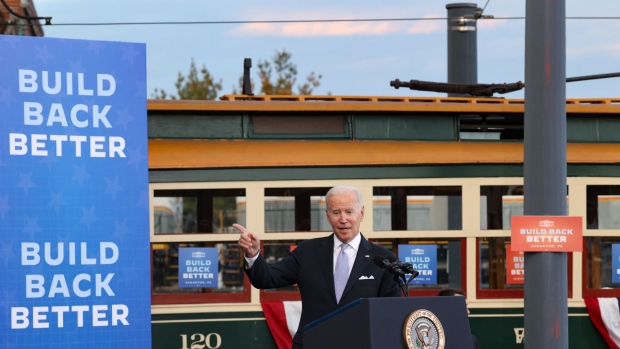 (Bloomberg) -- President Joe Biden’s signature economic plan, which the White House calls “Build Back Better,” is suffering from a branding problem: Americans aren’t sure what it would do.

They can hardly be blamed. Not even Congress knows what the bill would accomplish, with the contents of the plan changing day-by-day as Democrats squabble over how much it should spend, who it should benefit and who should pay for it.

On Tuesday, for example, the White House indicated it would retreat from including free community college in the bill. Then on Wednesday, Democrats began discussing alternatives to long-planned hikes for corporate and personal income tax rates to assuage a Senate holdout, Arizona’s Kyrsten Sinema.

Biden will promote his economic agenda on Thursday during a town hall-style event hosted and broadcast by CNN.

A CBS News poll published Oct. 10 found that just 10% of Americans say they know specifics of the bill, and only about a third think it would help them directly.

Biden’s public works plan proved an easier sell both to the public and in Washington: additional money for roads, bridges, trains and airports intuitively makes sense. Nineteen Senate Republicans voted for the $550 billion infrastructure bill, including Minority Leader Mitch McConnell of Kentucky, although it has been held up in the House amid Democrats’ protracted negotiations.

The president is often forced to resort to abstractions to promote Build Back Better, which is making it harder for him to muscle it through Congress.

“These bills are not about left versus right,” Biden said in a speech Wednesday in his hometown of Scranton, Pennsylvania. “They’re about competitiveness versus complacency.”

Republican communications professionals say their party has the upper hand in the messaging battle.

“I will state the obvious, but they need to shift the focus away from process to policy. So far, the coverage around their proposal is all around Democratic divisions, which inevitably makes it impossible to sell,” said Alex Conant, the former communications director for Senator Marco Rubio’s 2016 presidential campaign and a partner at the Washington firm Firehouse Strategies.

“Frankly, they need to talk about what their goals are,” he said. “Why is this necessary?”

Ron Bonjean, a longtime Republican strategist and partner at at Rokk Solutions, added: “When you have a shifting number and shifting programs, it becomes confusing to follow.”

Instead of focusing on the legislation’s new investments in child care, the elderly, education, healthcare and climate change, Democratic lawmakers have openly haggled over the price tag. A standoff between the party’s progressive and centrist factions has created cable news-ready drama.

“Given how much is wrapped up in this package, it was always going to be a long and intense negotiation,”  said Ben LaBolt, a former spokesperson for President Barack Obama. “One way to start is to build the case for the way this will help middle class families and focus the public on those conversations, while at the same time preserving room for the closed-door negotiations to bring all of the elements of the party together for the biggest, most comprehensive approach possible.”

That was the intent of Biden’s Scranton trip on Wednesday, White House aides figured -- an opportunity for the president to talk about how his economic agenda would help families like the ones he grew up alongside in Pennsylvania in an evocative venue, the city’s Electric Trolley Museum.

In his speech, Biden tried to describe the programs in the legislation, interspersed with frequent asides of growing up in Scranton.

“Frankly, they’re about more than giving working families a break; they’re about positioning our country to compete in the long haul,” he said. “Economists left, right, and center agree.”

Back in Washington, Biden has struggled to hone in on a final compromise amid Democrats’ differing demands. Every Democrat in the Senate must support the Build Back Better plan for it to pass Congress, leaving the White House with no margin for dissent.

While advocacy groups have started to spend heavily to promote policies in the plan, most of the discussion remains centered on its cost.

Biden’s advisers are banking on the presumption that ordinary Americans don’t pay much attention to the machinations of everyday Washington. Much as they were during the presidential campaign, the president’s aides are largely dismissive of what they call horse-race stories.

But Biden’s team had a much easier time selling his pandemic relief legislation, the American Rescue Plan, in March, with its convenient focus on three clear issues -- money for vaccines, money to re-open schools and checks sent directly to American households.

The discussion of Build Back Better and its various components is more wide-ranging, and Biden’s aides and allies are aware that if they are able to pass some version of the plan, they’ll need to do a better job explaining its significance.

A lesson still fresh in Democratic minds came in 2009 and 2010, when Obama won passage of both an economic stimulus plan and the Affordable Care Act -- only to watch his party suffer massive losses in midterm elections and Republicans take control of both chambers of Congress.

But some Republicans see the same messaging mistakes unfolding yet again.

“They haven’t laid out why we need this, other than Democrats are in power now and aren’t going to have it again for a long time,” Conant said.