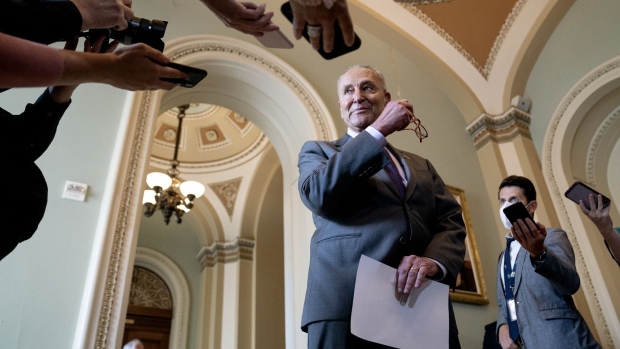 Chuck Schumer at the U.S. Capitol in Washington, on July 28. , Bloomberg

(Bloomberg) -- President Joe Biden’s ambitious economic plans got a major push forward with the Senate voting to begin work on a $550 billion infrastructure bill and Democrats uniting behind a plan to muscle through a broader budget resolution to carry the party’s priorities.

The twinned proposals -- which Senate Majority Leader Chuck Schumer said he hopes to get through his chamber before the upcoming August recess -- set the stage for some $4.1 trillion in new spending if they ultimately became law, amounting to the biggest overhaul of domestic programs in decades.

“My goal remains to pass both the bipartisan infrastructure bill and a budget resolution during this work period,” Schumer said on the Senate floor. “We are going to get the job done and we are on track.”

Biden, who has been heavily involved in Senate negotiations, had to give in order to get. He had originally pitched a $2.25 trillion infrastructure proposal, but had to scale that back in negotiations with Republicans. Democrats hope to recoup some elements that didn’t make the Senate infrastructure deal in the Democrat-only legislation that will follow the budget resolution.

The president is not assured victory on either front. But the legislative momentum Wednesday, coming as Covid-19 cases surge around the country and Republicans hit him on rising inflation, is a notable success at a difficult time for the administration.

“This deal signals to the world that our democracy can function, deliver, and do big things,” Biden said in a statement after the deal was struck.

The infrastructure package, totaling some $550 billion, could face strong headwinds in the House, where Democrats will hold just a three-seat majority by the time it comes up for a vote. Progressives have tied their support for that legislation to the broader budget blueprint, which includes priorities like a Medicare extension. But the current proposal at $3.5 trillion is not as expansive as they would like.

That means Biden still will have to balance the demands of his party’s fiscal moderates and and progressives in both chambers. Given the narrow margins, every vote is crucial.

Wednesday’s 67-32 procedural vote on the infrastructure package sets up debate on the measure and is good indication that it may have enough support to pass the Senate by early next week. Seventeen Republicans, including Senate Minority Leader Mitch McConnell, voted to move forward, though that doesn’t mean they will back the final legislation.

“What happened tonight was a huge step forward,” Ohio Senator Rob Portman, the top GOP negotiator on the infrastructure deal, said after the vote. He added the tally was “pretty darn good.”

“We think we can build on that,” he said.

Supporters highlighted the bipartisanship on display in the negotiations and the vote. Senator Mark Warner, a moderate Democrat who helped negotiate the deal, said it was a needed respite from the surge of coronavirus cases and the intense partisan bickering over the investigation of the Jan. 6 riot at the Capitol by a mob of former President Donald Trump’s supporters.

“I think what we’re delivering tonight is a tonic for the soul of America,” Warner said.

But next up is the budget resolution, which is not expected to attract any GOP support in either chamber.

Senate Budget Chairman Bernie Sanders said he has the votes to pass a broad budget resolution next week, telling reporters that all 50 senators who caucus with Democrats are on board with passing a resolution. That could lead to follow-on legislation of roughly $3.5 trillion to address priorities such as climate change, the tax code, health care, and immigration.

“It is my absolute conviction that you’re not going to have a bipartisan bill unless you have a reconciliation bill of $3.5 trillion,” Sanders told reporters Wednesday night. “The working families of this country, the children of this country, the elderly people of this country deserve to have their needs met, and we intend to do just that.”

Sinema, a first-term moderate who was instrumental in crafting the infrastructure deal, said she wants to move ahead with a fiscal blueprint to kick-start the process using Senate rules that can short-circuit a Republican filibuster.

Yet she asserted that her vote on the larger legislation hinges on the outcome of negotiations on its size, positioning herself as a pivotal player in the months ahead. The $3.5 trillion, she said, is simply too much.

“In the coming months, I will work in good faith to develop this legislation with my colleagues and the administration to strengthen Arizona’s economy and help Arizona’s everyday families get ahead,” Sinema said.

That may create complications for final passage of both the infrastructure plan and the budget package. House Speaker Nancy Pelosi has made plain that the infrastructure legislation won’t be voted on until the Senate passes the second tax and spend package with the party’s priorities intact.

On Wednesday House Congressional Progressive Caucus leader Pramila Jayapal of Washington backed up that statement with a threat to vote down the infrastructure bill if the group’s agenda isn’t addressed.

“The votes of Congressional Progressive Caucus members are not guaranteed on any bipartisan package until we examine the details, and until the reconciliation bill is agreed to and passed with our priorities sufficiently funded,” she said.