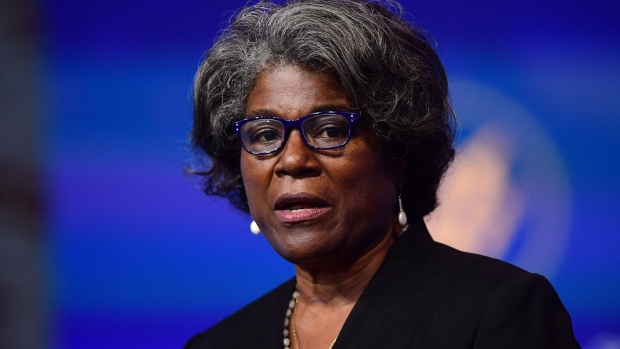 (Bloomberg) -- President Joe Biden’s nominee for United Nations ambassador will pledge to restore American leadership, warning that its absence in recent years has allowed China to fill the void.

“When America shows up, when we are consistent and persistent, when we exert our influence in accordance with our values, the United Nations can be an indispensable institution for advancing peace, security, and our collective well-being,” Linda Thomas-Greenfield will say at her confirmation hearing before the Senate Foreign Relations Committee on Wednesday, according to excerpts of her prepared remarks.

“If instead we walk away from the table, and allow others to fill the void, the global community suffers -- and so do American interests,” Thomas-Greenfield plans to say. “In particular: We know China is working across the UN system to drive an authoritarian agenda that stands in opposition to the founding values of the institution -- American values.”

Under the Trump administration, the U.S. repeatedly clashed with the UN and its organizations, withdrawing from the Human Rights Council and the World Health Organization. Critics argued that walking away allowed China to expand its influence, undermine human rights positions and sponsor resolutions that reflect its worldview.

Thomas-Greenfield, 67, is expected to face questions on the Biden administration’s foreign policy priorities. She will be leaning on her experience across four continents, including State Department assignments in Jamaica, Nigeria, Switzerland and Pakistan, as well as in Washington as assistant secretary of state for African affairs.

Thomas-Greenfield, who would be one of the highest-ranking Black officials in Biden’s administration, plans to emphasize “old-fashioned, people-to-people diplomacy” while calling for making the UN more accountable.

“We must have the courage to insist on reforms that make the UN efficient and effective, and the persistence to see reforms through,” she plans to say.