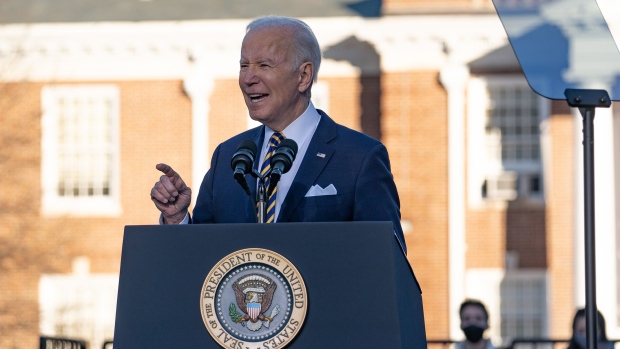 ATLANTA, GA - JANUARY 11: U.S. President Joe Biden speaks to a crowd at the Atlanta University Center Consortium, part of both Morehouse College and Clark Atlanta University on January 11, 2022 in Atlanta, Georgia. Biden and Vice President Kamala Harris delivered remarks on voting rights legislation. Georgia has been a focus point for voting legislation after the state voted Democratic for the first time in almost 30 years in the 2020 election. As a result, the Georgia House passed House Bill 531 to limit voting hours, drop boxes, and require a government ID when voting by mail. (Photo by Megan Varner/Getty Images) , Photographer: Megan Varner/Getty Images North America

(Bloomberg) -- President Joe Biden’s speech on voting rights received a lackluster reception from civil rights groups, a troubling sign from a crucial constituency less than 10 months out from midterm elections.

The NAACP, one of the nation’s largest civil rights groups, and the family of the late Reverend Martin Luther King Jr., called on the White House to go beyond speeches and act with the same urgency it has on its economic agenda to prod the deadlocked U.S. Senate to pass voting rights legislation.

“Our democracy stands in its final hour,” NAACP President Derrick Johnson said in a statement. “While President Biden delivered a stirring speech today, it’s time for this administration to match their words with actions, and for Congress to do their job. Voting rights should not simply be a priority — it must be THE priority.”

“The president cited his pedigree of dealmaking to pass voting rights legislation as a senator — we know he has the power and influence to do the same today,” King said in an emailed statement. “When we met with the president today, we reiterated that we expect strong action, not just words.”

Black voters are a reliable bloc for Democrats. Biden has credited African-Americans with resuscitating his flailing 2020 Democratic primary campaign and turning out to help propel him to the White House in the general election.

Speaking at Morehouse College in Atlanta after visiting the crypt of Martin Luther King Jr. and Ebenezer Baptist Church, where King was a pastor, Biden called on the U.S. Senate to change its rules to overcome a Republican filibuster by allowing a simple majority to pass voting-rights legislation.

“The threat to our democracy so grave, we must find a way to pass these voting rights bill, debate them, vote,” Biden said. “Let the majority prevail.”