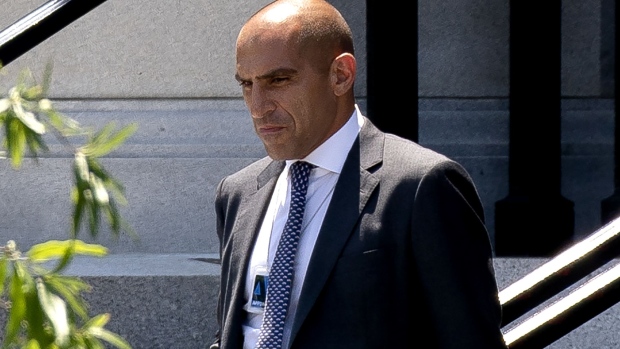 Rostin Behnam, acting chairman of the Commodity Futures Trading Commission, from left, Jelena McWilliams, chairman of the Federal Deposit Insurance Corporation, and Jerome Powell, chairman of the U.S. Federal Reserve, walk to the West Wing of the White House in Washington, D.C., U.S., on Monday, June 21, 2021. President Biden is meeting with the nation's top financial regulators for an update on the state of the country's financial systems and institutions. , Bloomberg

(Bloomberg) -- President Joe Biden plans to name Rostin Behnam to lead the U.S. Commodity Futures Trading Commission, which oversees much of the $582 trillion global derivatives market including cryptocurrency trading, according to people with knowledge of the matter.

The White House recently selected Behnam, who’s been leading the agency on an interim basis since January, according to the people who weren’t authorized to speak publicly. The timing of an announcement is still weeks away, the people said.

The pick would end months of speculation over who will oversee the Wall Street regulator that’s become significantly more powerful since the financial crisis. A White House spokesman declined to comment and CFTC officials didn’t respond to requests for comment.

Behnam’s nomination means that the CFTC will likely spend more time on issues like climate change. Behnam’s profile rose last year after he sponsored a report by an industry group that called on the U.S. government to require businesses to pay for their greenhouse gas emissions. In March, Behnam announced the CFTC plans to set up a climate-change unit that would assess derivatives’ role in reducing carbon emissions. The group has not yet released any findings.

For much of Behnam’s time as acting chair, the agency has been deadlocked with two Republicans and two Democratic commissioners. To break that standstill, the White House will have to fill another open seat at the agency.

Under Democratic leadership, the CFTC is poised to shift its focus away from the Trump administration’s business-friendly policies and crack down on derivatives trading, a cash cow for Wall Street.

The CFTC also has jurisdiction over parts of the cryptocurrency sector. The CFTC has said Bitcoin is a commodity and CME Group Inc., which it regulates, lists futures contracts tied to the token.

Meanwhile, Wall Street banks will be on the lookout for signs that the CFTC might revive efforts to assert its jurisdiction over cross-border swaps trading as it did after the 2008 financial crisis. Under Republican leadership, the agency took a far more deferential approach.