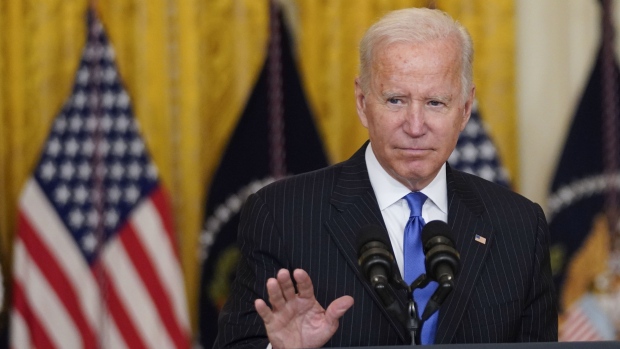 U.S. President Joe Biden speaks in the East Room of the White House in Washington, D.C., U.S., on Wednesday, Oct. 13, 2021. The Biden administration is trying to relieve supply-chain bottlenecks ahead of the U.S. Christmas shopping season, but officials acknowledge their options are limited as soaring consumer demand tests transportation and delivery networks. , Bloomberg

(Bloomberg) -- President Joe Biden said he’d like to see his economic plan address a “whole range of issues,” even if funding for individual provisions must be pared back or timed to expire in order to keep the cost of the legislation down.

“The question is how much of what is important can we get in the legislation,” Biden told reporters in Connecticut, after earlier conceding the bill would cost less than the $3.5 trillion over a decade that House progressives want.

“I’m of the view that it’s important to establish the principles on a whole range of issues without guaranteeing we get the whole ten years,” he said.

House Speaker Nancy Pelosi said in a letter to House Democrats on Monday that the consensus among them “is to do fewer things well, so that we can still have a transformative impact on families in the workplace and responsibly address the climate crisis.”

The White House and Democratic congressional leaders are discussing how to scale back the social-spending measure to win the votes of two holdout Senate Democrats, Arizona’s Kyrsten Sinema and West Virginia’s Joe Manchin.

Manchin has said he wants a topline of no more than $1.5 trillion over 10 years for the legislation, though Biden has said he thinks a compromise might be found around $2 trillion.

House progressives have vowed to block the Senate-passed, bipartisan $550 billion infrastructure bill until Manchin and Sinema commit to support a version of the larger measure, which would carry many liberal priorities into law.